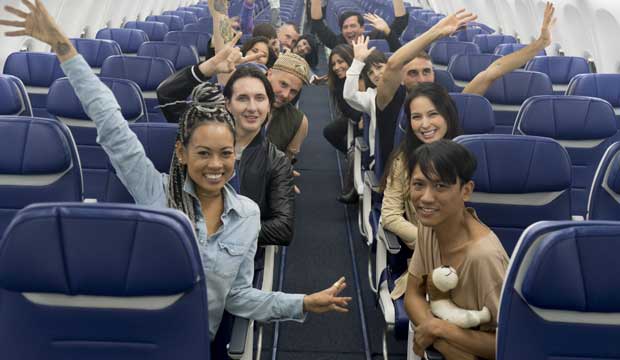 I’ve had it with these monkey-fighting unconventional challenges on this Monday-to-Friday plane!

It’s only week three of “Project Runway All Stars,” but it’s already time for an unconventional materials challenge, in which the contestants will design for the friendly skies. But “Buckle Up!” should be no sweat for a cast full of past “Runway” champions, right? Find out below in our live blog with all the minute-by-minute developments as they happen.

Last week’s “Top of the Class” challenge ended with the elimination of Canadian “Runway” champ Sunny Fong, leaving 13 contestants in the running for the world title. Dmitry Sholokhov won the season premiere challenge, and then Anthony Ryan Auld recovered from his rough start by winning in “Class.” That means the American “Runway” champs are two-for-two, while the international winners are aiming to strike back.

But the season has already been full of wild swings. For instance, Auld won the week-two challenge after nearly going home in the season premiere. Irina Shabayeva had the opposite trajectory: she was one of the judges’ faves in week one, but then was nearly eliminated in week two. Because every single contestant this season is a past winner, we already know they have what it takes to prevail again. But that also means anyone could be eliminated at any time. It only takes one bad week when the competition is so evenly matched.

TV journalist Tamron Hall and Victoria’s Secret model Martha Hunt joined the panel this week as guest judges. So which designs took off, and which took a nosedive? Find out below starting at 9:00pm (all times listed are Eastern).

9:01 p.m. – To introduce the next challenge to the designers, Alyssa Milano met them at the Southwest airline terminal on Long Island where she posed as a plane’s captain. This week the champions were asked to prove themselves with an unconditional materials challenge using flight-related products, including up-cycled leather that they must incorporate as an accessory to their garment.

9:05 p.m. – At baggage claim the designers found luggage full of seatbelts, cups, air sickness bfs, food items, reflectors, stirrers and other items commonly found and used on planes. Back in the workroom they started sorting their bags and planning out their designs. Seth Aaron Henderson was inspired by seatbelts mostly as-is, but Michelle Lesniak was more focused on deconstructing reflectors to use for her look.

9:15 p.m. – Jasper Garvida did not experience an unconventional materials challenge on his original season in the UK and so he was most out of his element, but it was Django Steenbakker that was most frustrated simply because he wasn’t comfortable working in this manner. During his consultation with Anne Fulenwider, Django’s process was question, mostly because he hadn’t accomplished much yet. Seth Aaron also took heat for not reworking the seatbelts creatively and instead just using them as-is.

9:22 p.m. – During model fittings, Michelle didn’t have anything nice to say about Seth Aaron’s look, but he was confident that it would be in conventional for the win. And with only two hours left in their main work day, the designers were really feeling the pressure waiting for paint to dry, still peeling materials apart, hammering and putting finishing touches on their garments.

9:28 p.m. – The morning of the runway was spent completing the requirement that each designer create an accessory to accompany their garment. In Michelle’s case she made a purse that doesn’t necessarily match her garment and Irina created a hat that no one in the workroom seems to like.

9:30 p.m. – Prior to heading out to the runway, the designers were most concerned for Sean Kelly‘s uninspired literal interpretation of his material, Seth Aaron whose look wasn’t inspired, Michelle’s whose silhouette didn’t present any new ideas and Juli Grbac who made something beautiful but might not have taken enough risks. Jasper, however, managed to get through his panicking and created something that some seemed to think could be a threat for the win.

9:42 p.m. – Looking for glamorous designs “fit for modern air travel,” the judges asked Seth Aaron, Michelle, Jasper, Juli, Irina and Sean to remain for critiques after seeing their garments walk the runway. In the end, Irina had ditched her hat for an oversized handbag that looked great with her dress and Seth Aaron remained overly confident about his use of the belts. Meanwhile, Sean and Michelle were both pleased with how their reflectors looked in the lights of the runway and Jasper and Juli expressed concern that their pieces wouldn’t hold together (Jasper) or weren’t exciting enough (Juli).

9:47 p.m. – In their critiques, Georgina Chapman and Isaac Mizrahi both thought Michelle’s dress looked expensive and was a step up for an unconventional challenge. The panel also really loved Irina’s red dress, making it another boomerang for her from bottom to top this week. The worries about Seth Aaron and Sean’s looks all came to fruition with the judges feeling like they had good ideas that just weren’t executed well. Juli came under fire for not pushing the boundaries enough despite everyone liking the overall appeal of it. Issac’s oddest positive critique of the week was given to Jasper’s look which he said looked like a “tongue-in-cheek bimbo.” Um… okay Isaac! That’ll be my new personal aesthetic.

9:59 p.m. – Ultimately, both Michelle and Jasper were declared safe, leaving Irina to be declared the winner, her first of the season! Of the bottom three, Sean was also declared safe which meant that it was down to Juli and Seth Aaron for elimination. After being a high score last week, Seth Aaron was chosen to go home even though he still thought he should have won.

NEXT WEEK: The designers are asked to celebrate the female figure by taking a corset and turning it into a high fashion look.