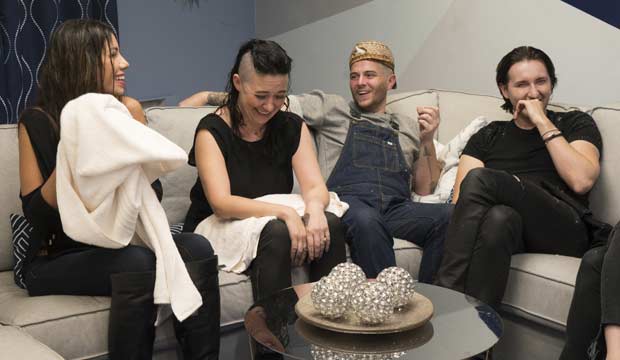 “Project Runway All Stars” season seven is heating up — literally. In episode 10 of the fashion competition, “Climate Quick Change,” the remaining designers had to create convertible resort-wear that could transition from one climate to another, with Tony-winning actress Cynthia Erivo and fashion designer Reem Acra on hand as guest judges. So who had the hottest looks, and who was left out in the cold? Find out below in our live blog with all the minute-by-minute updates as they happen.

The competition is starting to wind down. There were only six designers left going into tonight’s meteorological runway show, and the playing field has been remarkably level. All of them had won at least one challenge over the course of the first nine weeks, while only two of them had won two challenges (Anthony Ryan Auld and Christina Exie). So there is no decisive front-runner among the competitors, which is understandable given how accomplished they all were from the start.

Every contestant this season had won a previous season of “Runway” or one of its international spin-offs. Of the top six, only two of them come from the foreign shows (Exie from Australia, Evan Biddell from Canada), while the American “Runway” shows account for the other four (Auld, Dmitri Sholokhov, Irina Shabayeva and Michelle Lesniak).

Can the final foreigners achieve a late-season storm surge and outlast the more dominant American alums? Or will they be all wet? There are only a few episodes left after tonight, so find out who averted a “Climate” catastrophe below starting at 9:00pm (all times listed are Eastern).

9:01 p.m. – After Sean Kelly’s elimination the designers returned backstage to hear a “weather report” from Alyssa Milano, presenting the next challenge: transformational resort wear. One by one the designers went to another room to read a weather report as if they were newscasters in order to learn their resort location and the two weather conditions they’d design for.

9:09 p.m. – During the first stages of design time in the workroom, Evan started to feel insecure as he looked around the room and saw everyone else going glam with their designs while he had only thought of a bathing suit for his resort look. Welp!

9:16 p.m. – When Anne Fulenwider arrived for a visit the designers were still trying to figure out the transformative properties of their garments. But Anne was surprisingly pleased with the direction that everyone was going in, but had a few questions. With Anthony Ryan she didn’t like seeing that he was using bright blue and yellow again and with Irina she was worried that the first impression of her look read as “dull.” In Evan’s garment she was confused why he chose denim for a Miami look at the beach, considering the sand and the humidity there.

9:21 p.m. – Unlike in other challenges, this week the designers also had to teach their models how to transform the garments on the runway. Christina struggled the most with this because her transformation was not only low-drama, but also really exaggerated–I guess she has to wrap a belt around her waist like five times? LOL. Eventually she began to question the lack of ease in her garment, despite thinking that the final look of it would be gorgeous.

9:29 p.m. – During model fittings before the runway, Evan realized he was unhappy with the way his jumpsuit looked with the bathing suit underneath and so he set out to make a new bathing suit in two hours. Meanwhile Christina was still trying to figure out how to make the belt in her dress work and to get her model to handle it easily and quickly.

9:38 p.m. – On the runway, Irina’s transformation was more of a reveal and not that exciting and though Michelle’s skirt-to-jacket transformation was cool, the garment didn’t really work with what was under it because of the clashing prints. Christina’s belt moment was as clunky as we all thought it would be, especially compared to Anthony Ryan’s easy and quick tear-away jacket that revealed a cute dress underneath. Evan’s new bathing suit looked much cooler and matched the sporty vibe of the rain jumper that ended the transformation and Dmitry’s design turned out to be just his model wearing a dress while carrying a jacket and then, well, putting the jacket on for the snow moment.

9:46 p.m. – Because it’s the final 6, all the designers received critiques from the judges. Irina was the first up and received a clear top score, even if Cynthia, Reem and Alyssa weren’t exactly on board with her color choices. Georgina Chapman did not like the colors of Anthony Ryan’s and Isaac Mizrahi was concerned with the concept of having one open arm in a snow outfit. Reem really felt Miami in Evan’s look, but Georgina didn’t get a sense of Evan in it as a designer.

9:48 p.m. – Dmitry had to defend his two piece design when the judges (except for Isaac) did not understand how they worked together at all. Christina earned respect for how beautiful her piece was, but Georgina and Cynthia found it generic and the whole panel struggled to understand who she is as a designer. Michelle was another one that was clearly on top, especially for Alyssa who loved it and thinks she made one of the trickiest transformations work. As far as the prints, Isaac didn’t get them, but Cynthia and the others loved them together!

9:59 p.m. – After discussing, the judges decided that Michelle and Irina were the top 2, but that ultimately it was Michelle who deserved the win, her second of the season! Dmitry and Anthony Ryan had looks that divided the judges, but both were called safe leaving the two international designers, Evan and Christina in the bottom. The judges thought Christina’s looked inexpensive and that Evan’s junior. Ultimately, it was Christina’s time to go, despite her winning last week’s challenge and another earlier in the season.