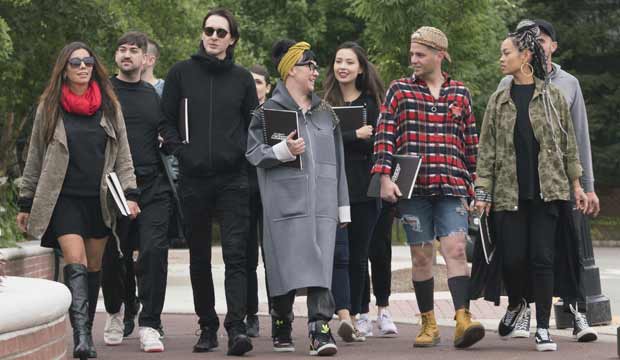 The “Project Runway All Stars” contestants this season designed looks inspired by national heritage, corsets and even airplane parts, but in episode five the show went to the dogs — or maybe the zebras, the elephants, or the gorillas. In “On the Prowl,” the remaining 11 competitors took their inspiration from zoo animals. So who won the challenge, and who went on the endangered species list? Scroll down for our live blog with all the minute-by-minute developments as they happen.

The international contestants got off to a slow start in this all-champions edition that pits winners of the American “Runway” against winners of the show’s foreign spin-offs. In the first four weeks of competition, three challenges were won by American champs: Dmitri Sholokhov in “All Stars Goes Global,” Anthony Ryan Auld in “Top of the Class” and Irina Shabayeva in “Buckle Up!” And two of the first three eliminations were contestants from abroad.

But Christina Exie put the international all stars on the board in episode four when the Australian “Runway” champ won the “Of Corsets Fashion” challenge. Was that the start of a surge for the foreigners? There are only four other international contestants left: Cynthia Hayashi (Brazil), Django Steenbakker (Netherlands), Evan Biddell (Canada) and Juli Grbac (Australia).

Hayashi and Steenbakker were coming off of low judges’ scores for their corsets looks, so our users predicted that they were at risk of elimination in “On the Prowl.” But this season has been tough to predict since the playing field is so level with an all-champions cast. Find out what happened below starting at 9:00pm (all times listed are Eastern).

9:01 p.m. – To present this week’s challenge host Alyssa Milano came out with a python around her neck — you know, like Britney Spears “I’m a Slave 4 U” era — gasp! The challenge: “attract the most attention on a wild night out” using animals as inspiration. To get inspired the designers went to the zoo to find out which animals were available for consideration and though most raced for the jaguar, Cynthia got there first. For everyone else, Christina got the alligator, Anthony Ryan the owl, Biddell the antelope, Sean Kelly the giraffe, Michelle Lesniak the porcupine, Irina the wallaby, Anya Ayoung-Chee the budgerigar, Dmitry the rhea, Django the lion and Juli the gibbon.

9:09 p.m. – Later in the workroom Juli became the focus of everyone else’s attention as they worried that she was taking on too much work to handle in the short amount of time. Furthermore, Biddell, one of her closest friends in the competition, commented that while she’s a successful commercial designer her design vision isn’t as elevated as it should be.

9:15 p.m. – Juli’s consultation with Anne Fulenwider didn’t go as bad as it could have gone and in fact Anne was able to offer her some sound advice about silhouette and keeping in mind the shapes that women want to create with the garments they wear. She also questioned how much skin Juli would be showing, which incidentally became a common critique in the workroom for other designers as well. Dmitry, however, got the dreaded “renaissance faire” label and was told to think about making his look a little more modern. Anne was most concerned with Django’s vision, both in color and pushing the design forward, but he was confident in his vision and wanted to stay the course.

9:20 p.m. – Model fittings offered both Django and Sean new perspectives on their designs. For Django he was even more sure that what he had in mind was correct while Sean, who had taken Anne’s advice to ditch a checkered textile, decided to return to his original vision as well.

9:23 p.m. – Elsewhere, Irina pointed out to Dmitry that she thought Michelle’s look this week was pulling ideas from his designs. After Anthony Ryan filled Michelle in on the gossip circulating between Irina and Dmitry, Michelle decided to confront Dmitry directly, calling in to question a friendship they had before the season even started airing.

9:27 p.m. – Michelle’s concern was that Dmitry was talking behind her back instead of directly to her face. He countered that everyone else was talking about it and so there was nothing he needed or wanted to address with her. The confrontation did become a topic for everyone in the workroom–Biddell’s perspective was that it doesn’t matter if Michelle was in fact taking ideas from Dmitry, but that if she was then she has to do it better than him and in his opinion, she was!

9:36 p.m. – Joining Georgina Chapman and Isaac Mizrahi as judges this week was actress Peyton List and supermodel Joan Smalls. Along with Alyssa, their combined scores marked Sean, Dmitry, Michelle, Django, Anthony Ryan and Juli as the six designers with the highest and lowest ratings of the week.

9:46 p.m. – The judges understood the reference of the owl in Anthony Ryan’s garment and although there were a few touches that they didn’t like, all of them really loved the geometry of it. Sean’s giraffe look worked in terms of inspiration, but a majority of the judges were not on board with the shiny checked fabric he used (just as Anne had warned him against). Dmitry was another top look though Georgina called him out for creating something similar to one of his earlier looks while Isaac commented that he actually thought Michelle’s look was his.

9:48 p.m. – Michelle’s porcupine-inspired dress impressed all of the judges for its visual quality, but Juli’s gibbon dress was oddly proportioned and wasn’t doing the female body any favors. Lastly, Django’s look failed to convey his ideas of power and royalty, leading a couple of the judges to call it one of his least successful garments in the competition.

9:59 p.m. – Of Anthony Ryan, Dmitry and Michelle the winning look went to Michelle, her first of the season! Along with Anthony Ryan and Dmitry, Django was also called safe and so it was between Juli and Sean for elimination. In the end, it was Juli’s ill-proportioned dress that had to be chopped and so she was sent home, leaving Sean to fight another week.

NEXT WEEK: Django receives a tough criticism from Anne once again in a red carpet challenge using metallic fabrics.