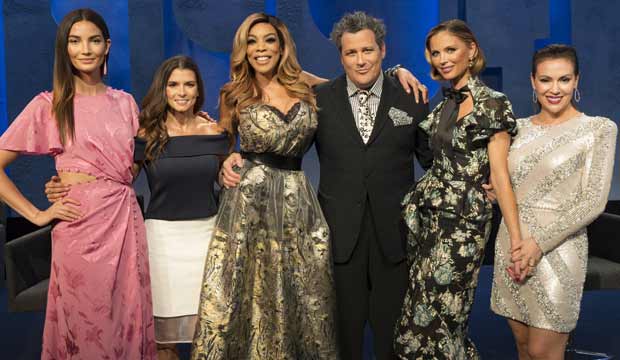 The “Project Runway All Stars” contestants put the “Pedal to the Metal” in episode six. The 10 remaining designers used metallic fabrics and unique textures to create red carpet looks that they hoped would please the guest judges: talk show host Wendy Williams, Victoria’s Secret model Lily Aldridge and race car driver Danica Patrick. So who drove the judges wild, and who had their fashion license revoked? Scroll down for our live blog with all the minute-by-minute developments as they happen.

This season of “All Stars” has pit past champions from American “Runway” shows against champions from abroad, and up to this point the Americans have wiped the floor with the international contenders. Three of the first four eliminations were from foreign “Runway” spin-offs, leaving four international designers up against six Americans. Of course, it must be noted that even the contestants representing the US version of “Runway” are a global coalition that includes designers from Belarus (Dmitry Sholokhov), New Zealand (Sean Kelly), and Trinidad and Tobago (Anya Ayoung-Chee), so the show has always celebrated fashion without borders.

The previous challenge, “On the Prowl,” resulted in a clash between two of the American alums. Sholokhov and a few of his fellow designers thought the look created by Michelle Lesniak was stolen from one of his past designs. The tension made it all the way to the runway, where both Sholokhov and Lesniak finished in the judges’ top three, but Lesniak won. Did that conflict carry over into this week’s show? And did any other temperamental designers throw shade at their competitors? (Spoiler alert: they always do.) Find out below starting at 9:00pm (all times listed are Eastern).

9:01 p.m. – This week’s challenge was a partnership with Butter London, a makeup brand releasing a new metallic series of products. The designers were tasked with creating red carpet dresses inspired by the Butter London products and using metallic fabrics.

9:04 p.m. – During sketching time, Anya was struggling to grasp how to work a metallic fabric into her usual aesthetic of long flowy dresses. The fabrics she tested at Mood were all more stiff than she’s used to working with and so it seemed like she’d either have a tough time with the challenge or come through with an unexpected moment of brilliance!

9:09 p.m. – Back in the workroom Anya was happy with the fabrics she ultimately purchased, but while the rest of the designers were diving head first into their garments she was now struggling with the creative vision of her dress. Elsewhere, Michelle approached Dmitry with an apology about their heated exchanges last week after Irina Shabayeva gossiped about whether or not Michelle’s look was a copy of Dmitry’s.

9:16 p.m. – During a workroom visit from Anne Fulenwider, Irina was told to elevate what looked like a “gold prom dress.” Evan Biddell however got a great response immediately, aside from the draped cape in the back that reminded Anne of “Game of Thrones.” Anne kept the digs coming, telling Michelle that her fabric choices could be cheap motel curtains, Dmitry’s dress was more “old lady in Vegas” than Grammys and Django Steenbakker‘s reminded her of a Bel Air 70-year old hostess.

9:21 p.m. – By the time model fitting time came around Anya was now struggling with sewing quickly enough to have something for her model to try on. Evan, on the other hand, was way ahead of schedule and so was taking his time and making a fanny pack just for fun, but Anthony Ryan Auld thought it meant the wasn’t pushing his design far enough and could end up in the bottom. It would be Evan’s first time in the bottom this season–he was a high score in the first week but has since coasted as safe for four straight weeks.

9:30 p.m. – With almost no time to go until the runway, Anthony Ryan helped Anya finish her garment, Evan remained confident that his look was going to win (despite the rest of the group thinking it wouldn’t) and Michelle declared that her “weird and different” dress is exactly what she wanted to create.

9:38 p.m. – On the red carpet runway, Dmitry’s had great movement and shimmer while Michelle’s came off a little stiff and dull. Django’s was perfectly metallic and dreamy, especially compared to Anthony Ryan’s dark blue super hero pants look. Both Irina and Anya’s looks showed a lot of leg–Irina’s had a high slit and Anya’s was just a short dress.

9:41 p.m. – Based on scores, the six designers with the high and low scores were Anya, Django, Sean, Michelle, Irina and Evan.

9:46 p.m. – The judges appreciated the contrast between Sean’s architectural top with the fringe dress bottom and really loved that it was interesting from every angle. Anya was going for something more edgy than the others, but the oversized sleeves were not a hit with any of the judges except Wendy. Irina’s mermaid sequin drape dress was adored by the whole panel and Django’s dress was a low score, but Georgina admitted that it grew on her as it stood in front of her rather than moving on the runway. The other judges found the dress to be too heavy overall. Evan’s dress ended up thrilling the judges because it was photographable from every angle and the earrings he made as an extra really worked to bring it all together. That left Michelle as the final designer with a low score because of a confusing hem and the way that it doesn’t necessarily read as a red carpet dress.

10:00 p.m. – Ultimately the judges chose Sean as the winner, leaving Irina and Evan as the runners-up. Of the bottom three, Django was the first to be declared safe with Anya as the judges’ choice for elimination over Michelle.

NEXT WEEK: The designers head to Charlie and the Chocolate Factory on Broadway for inspiration in the first avant garde challenge of the season.