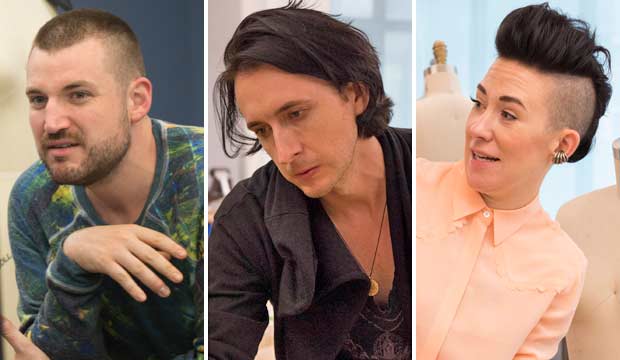 Almost everyone in this champions edition of “Project Runway All Stars” has had ups and downs in the first four episodes of the competition. From week to week you can’t count on anyone being safe. But so far there have been three designers who have escaped the judges wrath: Evan Biddell, Dmitry Sholokhov and Michelle Lesniak. Is one of them the front-runner to win?

Biddell’s only high score of the season so far actually came for a design in which he paid tribute to his Canadian heritage, creating a look with a Mountie motif. It bordered on costume with its bold gold buttons, but the judges loved his construction. Since that season premiere, however, Biddell hasn’t produced another standout look that earned him a critique, for better or for worse. He’ll need to stand out more as the season progresses, but there are worse things than advancing safely through the competition this early in the season.

Lesniak has also had one high score and three safe scores. Her high score was a big one, though: the unconventional materials challenge, in which she created a chic dress out of red reflectors. And that’s not the only time she has lived up to the “Runway” mantra of “make it work”: she even advanced safely through in the “Top of the Class” graduation party challenge in which she was assigned a pair of colors that even mentor Anne Fulenwider thought were unfortunate.

SEEJasper Garvida came unglued on ‘Project Runway All Stars,’ but were the judges (and other designers) fair to him? [POLL]

Sholokhov has had the most consistent run thus far. He won the first challenge of the season — the first time the double champ has ever won a challenge so early. Then he was safe for the next two weeks before getting another high score for his black “Of Corsets Fashion” look. It may be tough to beat him since he’s undefeated in his previous “Runway” competitions, but so was Seth Aaron Henderson, another double champ who was nevertheless eliminated in 13th place. Truly no one is safe.

But as of this writing Sholokhov is the front-runner to win the season with leading odds of 21/10 according to Gold Derby’s users. But Biddell and Lesniak aren’t his closest rivals in our forecasts. Instead, our users think Sholokhov needs to watch out for Irina Shabayeva and Sean Kelly. Biddell ranks fourth with 18/1 odds, while Lesniak is in 10th place with 97/1 odds. Are we underestimating them, or will Sholokhov indeed become the first “Runway” contestant to three-peat?