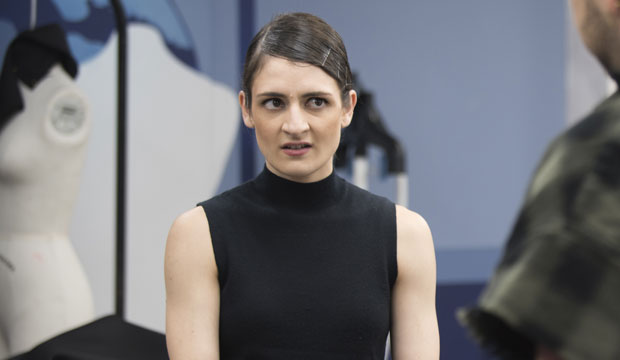 Well I didn’t see that coming. This season of “Project Runway All Stars” has been a dizzying merry-go-round of fashion fabulousness and faux pas, with designers going from high scores to low scores and back again, but I didn’t expect the judges to oust a contestant the week after she won her second design challenge. That’s what happened to Christina Exie in episode 10, “Climate Quick Change.” Were you as surprised as I was? And did you agree with that result? Scroll down to vote in our poll at the bottom of this post.

To be fair, I can see where the judges were coming from. The challenge was to design a resort look that would transition quickly from one climate to another. Exie was tasked with a beach look that would go from sunny to windy, but all she offered the judges was a two-piece bathing suit covered by a caftan that took way too long to cinch on the runway. They didn’t think it showed enough of an artistic point of view, and they came away with little understanding of the designer or her intended client. When it comes to “Runway” fashion, it’s often better to go big and fall hard than it is to be safe and forgettable, and that proved to be Exie’s downfall.

But at least her look was flattering. Though her concept lacked invention, I thought her bathing suit was unique and visually striking, while her caftan had a gorgeous print. I actually preferred that to Dmitry Sholokhov‘s design, which was meant to go from sun to snow; he created a printed dress that was genuinely beautiful, but paired it with a white blazer that seemed like it belonged in another challenge altogether and was simply draped shapelessly across his model’s shoulders. As far as his interpretation of the challenge, I thought he was the least successful.

Do you agree with me, or were the judges right to give Exie the boot? With her gone, Evan Biddell is now the only contestant left representing one of the foreign spin-offs of “Project Runway,” and he isn’t even spun off that far — he’s from Canada. Vote in our poll below to let us know what you thought of this week’s outcome.