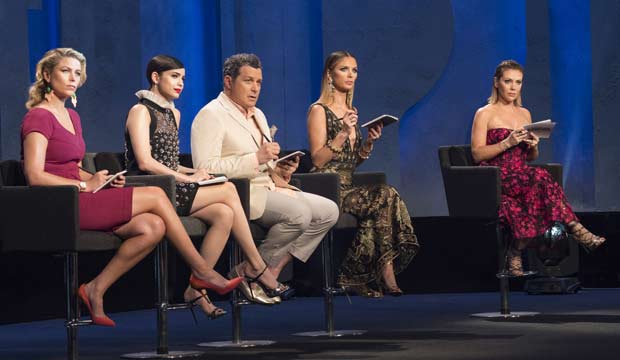 “Project Runway All Stars” started its seventh and final season on Lifetime last week, and it was a rare reality competition episode that ended with more contestants than it started with. It began with 12 designers, but no one was eliminated at the end of the first challenge. Instead, two more “Runway” alums were added to the lineup. What surprise twists were in store for the contestants in week two? Scroll down for our live blog with all the minute-by-minute developments as they happen.

Joining “Runway” from abroad are Christina Exie (Australia), Cynthia Hayashi (Brazil), Django Steenbakker (Netherlands), Evan Biddell (Canada), Jasper Garvida (UK) and Sunny Fong (Canada), with Aussie Juli Grbac also joining the show at the end of night one. So how will they all do in this clash of the titans? Interestingly, the first design challenged ended with American designers producing the two best looks (winner Sholokhov and runner-up Shabayeva), but also the two worst (Ryan and Ayoung-Chee, who were luckily spared from elimination).

But week two is a chance to wipe the slate clean and try to get back on the judges’ good side. In “Top of the Class,” the now 14 contestants will design outfits for a sophisticated graduation party, while Disney Channel actress Sofia Carson joins the panel as a guest judge. So who graduated with honors, and who flunked out of the competition? Find out below starting at 9:00pm (all times listed are Eastern).

9:00pm — I’m wondering how the 12 original contestants greet the two latecomers, Sean and Juli, who were added to the show at the end of the season premiere. They’re diving in, but they didn’t have to compete with everyone else last week. But no one was eliminated last week, so they’re all still pretty much on equal ground.

9:02pm — Judge Georgina Chapman introduces the contestants to the Magic Bus charity, which supports education in India, which brings us to this week’s challenge: a spring or summer dress for a graduation party. Last week’s winner Dmitry hands out graduation cap tassels to the other contestants, each with the two colors the designers will be using for their looks. Michelle gets green and gold — “I thought we were friends,” she says about Dmitry’s choice for me. She seems not to be a fan.

9:07pm — “If I see another fringe from him, I’n going to throw up,” says Dmitry about newcomer Sean, who won season 13 with lots and lots of fringe. I thought Sean leaned too much on fringe too, but now I kind of want to see more fringe just to see Dmitry’s reaction.

9:09pm — Evan has had enough of everyone’s complaining, including Michelle, who says she got “basic bitch” colors from a Crayola box. I agree with him. For an all-champions edition of “All Stars,” the assignment of putting together a look with two colors doesn’t sound all that overwhelming. What are they going to say when they get to an unconventional materials challenge and they have to make dresses with barbed wire and medical waste?

Mentoring session with Anne Fulenwider — She’s looking forward to seeing lots of tassels from Sean, but Juli is looking “tacky — good luck.” Anthony needs to learn to embrace orange. Dmitry’s dress looks like an “Olympic skating outfit.” Sunny is playing a little fast and loose with the rules and using his second color as more of an accent. Jasper’s look “could sell in a store tomorrow.” But Anne agrees with Michelle that the colors she got are garbage. Anne is “speechless” with Irina’s look, but not in a good way. She has no idea how her big, ruffly blue gown is going to work and what kind of a party a graduate would wear it to. Definitely some mixed opinions in there.

9:20pm — “I can even with Irina’s [design],” says a continually feisty Michelle, who thinks Irina’s look is “quinceanera” meets “prostitute.” I will say, Irina’s dress did not look good on the model in its current unfinished state. I really hope it’s going somewhere. But Sean think it looks like it’s out of a “hooker fairy tale” too. Yikes!

9:26pm — On the day of the runway “everything’s a bit of a blur” for Christina, who hasn’t been very confident about how her look is progressing. And Sean is stitching tassles to a dress that a look a little bit random on first glance.

9:36pm — Some snap judgments from me: I’m especially a fan of Evan’s elegant red and white look. Dmitry also did a good job with red and yellow. Cynthia’s look is gorgeous. Irina’s look is still a little provocative for a graduation party dress, but it’s still a lot better than Sunny’s cheat with his blah yellow dress combined with a tiny blue brooch. He’s the poorest design of the challenge for me so far, even though some of the other looks aren’t quite coming off for me. But yes, I still really like Anthony’s orange and blue look.

9:42pm — Seth, Sunny, Anthony Christina, Sean and Irina represent the highest and lowest scoring looks. I hope Anthony is among the high scores and Sunny is among the low scores. And I have a sneaking feeling the judges will like Irina’s look after how much the other designers were throwing shade.

Seth — Isaac thinks it looks “expensive.” Alyssa thinks it’s “sexy without being overtly sexy.” But Georgina thought it had “one too many thoughts in it.”

Sunny — Sofia loves the dress, but Alyssa is “bummed” that he didn’t use the second color. Georgina thought the blue brooch was a  middle “finger up” to the challenge. Agreed!

Anthony — Isaac “loves” it, and he’s thrilled Anthony stuck around this week and wasn’t eliminated after the first challenge.

Christina — Georgina thinks the look is “matronly” and “old” and “cheap-looking.” But Isaac loves the red horsehair detailing.

Sean — Isaac thinks the look was “fabulous,” but it’s a “mother’s dress.” Sofia thinks it looks more like a red carpet look, but likes the design. It didn’t come off as well for me personally — feathers attached to a nice white dress.

9:54pm — I have a feeling Sunny and Irina are the bottom two. They like Sunny’s design better, but I think he deserves to be eliminated for entirely rejecting the purpose of the challenge. Of the dresses they loved, I’m rooting for Anthony to win, but I’d be happy with a Seth victory as well.

The winner is … Anthony — hooray!

10:00pm — Christina had a low score, but she’s safe, so I was right that Sunny and Irina are in the bottom two.

The eliminated designer is … Sunny. Sad to see him go, but he needed to have a lot more respect for the challenge.

Who will be eliminated? Sunny Fong

Who will be in the bottom-two, but safe? Irina Shabayeva

Who will win the design challenge? Anthony Ryan

Who will be the runner-up? Sean Kelly