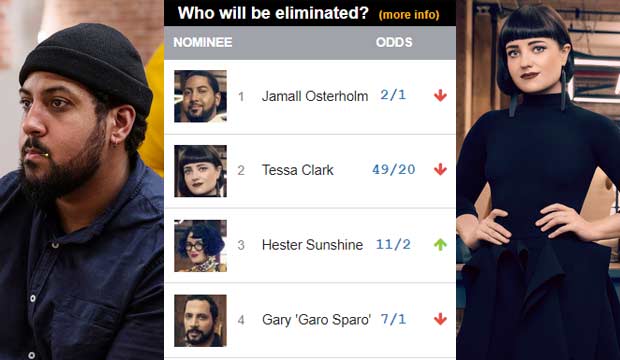 There are six “Project Runway” designers left going into tonight’s 11th episode, “New York City of Dreams.” Everyone remaining has won at least one challenge thus far, so the judges’ decisions are only getting tougher. But there are two designers we think are at the greatest risk of elimination: Jamall Osterholm and Tessa Clark. Do you agree that one of them will be knocked out next? Make or update your predictions here before tonight’s show.

Our racetrack odds are calculated by combining the forecasts of “Runway” fans we poll every week in our predictions center. And Osterholm currently leads our elimination predictions with odds of 2/1. That may be a bit surprising since Osterholm just had two high scores in a row from the judges, but it took him a while to get it together. At age 23, he’s the youngest designer in the whole competition, and his relative inexperience showed in the middle of the season when he struggled to finish his garments and translate his ambitious ideas into coherent designs. Over one four week period he landed at the bottom of the judges’ scores three times. Has he put those mistakes behind him for good, or will his inconsistency come back to bite him now that the season is almost over?

Meanwhile, Clark ranks second in our predictions with 49/20 odds of being sent home. Unlike Osterholm, she got off to a great start, winning the very first challenge of the season and then getting another high score right after that in the “Future is Here” team challenge. But she only got one other high score after that (in “Power Play”). And in “The Stitch is Back” she got her first low score of the season. At this point the judges have started to wonder about her limitations as a designer with her minimalist aesthetic and her fondness for unfinished hems. It’s possible she peaked too soon, while other designers have been coming into their own more and more as the season has progressed. It’s been a long time since she’s shown the judges a winning look, so if she struggles again they’re unlikely to give her the benefit of the doubt.

Check out our elimination prediction graphs below. Click on them for more detailed forecasts for tonight’s show. 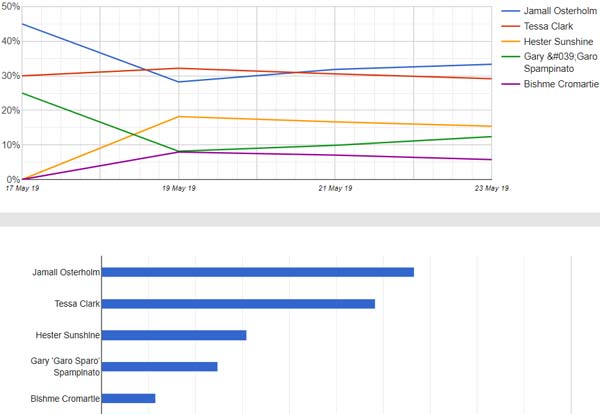