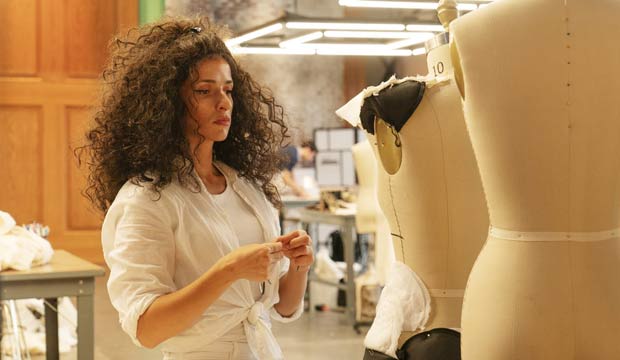 The judges mean business this season on “Project Runway.” In the season premiere, “Blast Off,” they sent two designers home instead of just one: Asma Bibi and Jenn Charkow, who joined forces for the “Blast Off” team challenge but were grounded by their lack of cohesion and craftsmanship. So who’s next? Our readers who have made their forecasts here in our predictions center think Victoria Cocieru may be in trouble. Do you agree?

With odds of 21/10, Cocieru is the likeliest to be eliminated in week two according to “Runway” fans. But her cosmic look was safe when the judges announced the best and worst designs of the challenge, which was to create futuristic fashions for a space station excursion. Cocieru paired up with Veronica Sheaffer for the team challenge, but it was Alan Gonzalez and Dayoung Kim who landed in the bottom with Bibi and Charkow.

However, Cocieru was somewhat flustered during the challenge, wandering away from mentor Christian Siriano while he was advising her and Sheaffer about their plans. The Moldovan designer also admitted that speaking English was a challenge. And the look she ultimately sent down the runway — a dress that was split down the middle between flowing fabric and metallic material — might have been on the borderline of the judges’ scores. I think it might have been Sheaffer’s look that kept them both safe, though we can’t say for sure what the judges thought since they didn’t get a critique.

Fashion is fickle, and we’ve only seen one design from each of these contestants so far, so it’s tough to say for sure who will rise to the occasion next and who will struggle. It’s common for designers to go from the top of the judges’ scores to the bottom, and vice versa, so who do you think will be in, and who will be out? Make or update your predictions here before tonight’s show.