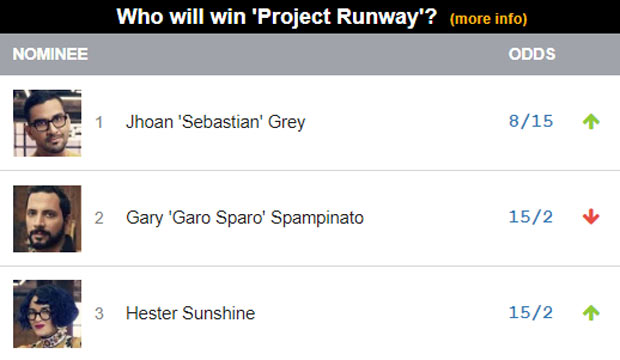 Can anyone beat Sebastian Grey on “Project Runway”? Even when he doubted himself so much he was tempted to quit the show entirely, he has been one of the judges’ favorite designers, and now that the show is down to its final three contestants going into tonight’s season finale he seems stronger than ever. As of this writing he gets leading odds of 8/15, according to the combined forecasts of over a hundred “Runway” fans who have made their predictions here in our predictions center. Do Garo Sparo or Hester Sunshine stand a chance?

There was a surprise last week in the penultimate episode of the season. In a final challenge to decide which three designers would get to show their collections out of the four finalists, we assumed Sunshine was in trouble. Before the final four she had a couple of rough challenges that threatened to derail her progress. Her wild design aesthetic clashed with her client in “New York City of Dreams,” and then her conceptual art installation piece went awry in “The Art of Fashion.”

But when Nina Garcia asked her for a preview of her collection along with one extra look in a single solid color, Sunshine nailed it — though not until after she impaled her finger on a sewing needle and had to create a whole new look from scratch. She and Grey were the first two designers the judges sent through. It was Garo Sparo and Bishme Cromartie who struggled, and Cromartie was ultimately eliminated after a death and an illness in his family threw him off his game.

Going into tonight’s show we now have an idea of the collections the designers will present. Sebastian showed no signs of weakness when previewing his collection for the judges, so most of the fans we’ve polled think he’s the man to beat. However, I think Sunshine’s surprise resurgence and no-holds-barred style make her a dark horse to win. As it stands in our predictions, she and Garo Sparo are tied with second-place odds of 15/2. But watch out. We’ve underestimated Sunshine many times before. Count her out at your own risk.