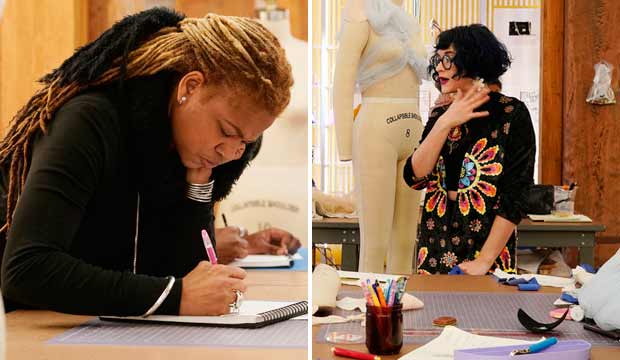 Some people just don’t work well with others. Hester Sunshine has made a quick impression in the first two weeks of “Project Runway” season 17 with her exuberant personality, eccentric style and blue hair. But as she admitted last week in “The Future is Here,” teamwork isn’t her strong suit. She almost did her team in by forcing them to work around her obsession with tulle fabric. Her teammate Nadine Ralliford was fit to be tied, and the “Runway” fans we polled were decidedly on Team Nadine. Scroll down to see our complete poll results.

When Sunshine was assigned to work with Garo Sparo and Ralliford to create looks inspired by futuristic sci-fi body augmentations, even Garo Sparo was worried about the group dynamic given Sunshine’s high-strung personality, and his fear was well founded. Sunshine spent a large portion of their design budget on tulle. Then halfway through the challenge she decided to ditch tulle, forcing Ralliford to give up some of her fabric and compromise her design. And then Sunshine went all-in again on tulle, but she had already rendered Ralliford’s fabric unusable.

Ralliford called Sunshine a “baby” and “Freddy Krueger,” and 93% of our readers agreed with her outrage, saying she was “right to be angry at Hester for dragging the team down with her bad fabric choices.” Only 7% of respondents thought Ralliford should have taken Sunshine’s antics “in stride.” Luckily for all three members of the team, the judges ruled them safe for their collection. Frankie Lewis was eliminated instead when her disorganized team landed at the bottom. But Sunshine, Ralliford and Garo Sparo are probably all relieved they’ll be working solo again in episode three. 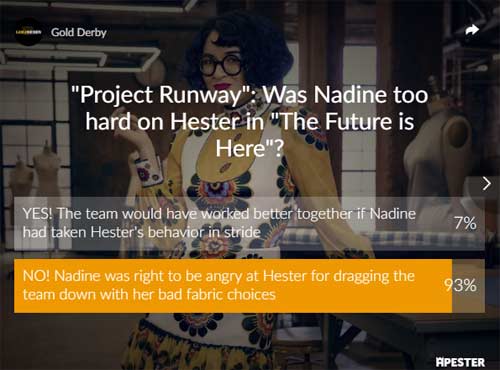 'Big Brother 22' spoilers: October 21 episode will include Week 11 Power of Veto competition and…

'Big Brother 22' spoilers: Like you, Cody can't believe how good he's had it

Justina Machado used her 'Dancing with the Stars' waltz to empower women with curves: 'You are…

He won it that way: AJ McLean tops the 'Dancing with the Stars' leaderboard for the first time with this…

Skai Jackson struggled again on 'Dancing with the Stars,' so did fans come to her rescue when she needed…

You'll get an extra episode of 'Big Brother 22' this week

'Big Brother 22' spoilers: There's only one interesting scenario left, but it's not gonna…