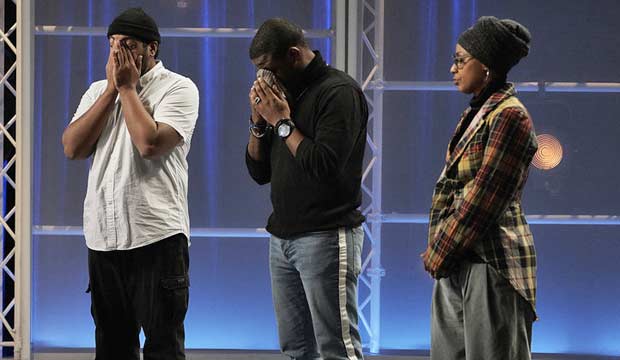 Jamall Osterholm had immunity during the “Project Runway” team challenge last week in “Blame it on Rio.” He had won the previous week in “Elegance is the New Black,” so the judges couldn’t send him home even if they wanted to. But that resulted in one of the season’s most surprising exits so far: Renee Hill, whom many of our readers thought would win the whole competition, unceremoniously exited. The fans we polled are crying foul. Scroll down for our complete poll results.

The “Rio” challenge split the designers into teams of three to create mini-collections for celebrity client Morena Baccarin‘s Brazilian vacation. Hill ended up working with Osterholm and Venny Etienne by default because no one else selected them. On paper, this seemed like a strong group since Osterholm and Hill had both won challenges before and Etienne earned multiple high scores from the judges. But it turns out three heads were not better than one. They landed at the bottom, and the judges sent home Hill because they couldn’t sent home Osterholm.

Only 19% of our respondents thought the judges made the right call. To be fair, Hill’s vacation look was unflattering and ill-fitting, but this was only the second time Hill got a low score from the judges, and the first time was during another team challenge. Clearly it was the team collaboration that threw her off and not any inherent lack of style or taste. “Project Runway” is fundamentally a fashion competition and not a teamwork competition; how many times during her career is Hill ever going to be asked to put together a collection with two other randomly selected designers? So why hold this against her?

According to 36% of our readers Osterholm should have gone home, immunity be damned. Another 32% would have given Etienne the boot. And 13% would have eliminated a designer who wasn’t even in the judges’ bottom three. What do you think? Did the judges drop the ball by dropping Hill? Check out the results below. 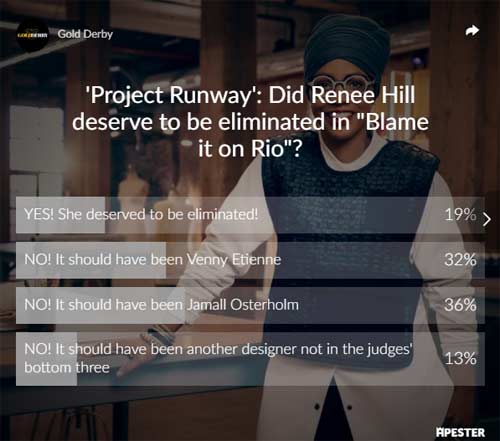