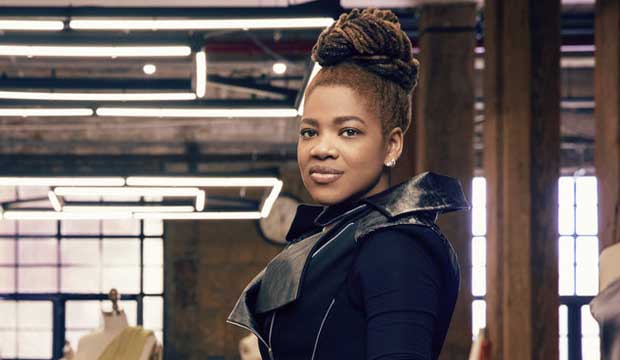 Has Nadine Ralliford inherited eliminated designer Cavanagh Baker‘s “rhymes with itch” mantle on Bravo’s “Project Runway” 17?  The preview below of this week’s episode suggests that might be the case. For a challenge that requires an outfit that is head-to-toe print that involves Beyonce‘s stylist Marni Senofonte, Nadine has one of the curvier models to attire. Even my untrained eyes can see there are definite fit issues. The top is too loose and the pant legs are way too tight.

She ignores these facts and instead is critical about the person wearing it. “Looking at my model, the outfit is not totally what I wanted.” She says she can cinch the wrap-around top to be tighter. But then she confesses, “I love this outfit. I just don’t like it on my model.” Let’s just say the cut and the print does nothing for her model’s figure and the animal-like print is simply not flattering.

But instead of blaming herself, Nadine begins to criticize her model’s walk. “You have long legs. You’re supposed to be able to take some long strides. You’re moving your shoulder too much.” Nadine, who is a fashion professor and has her own line of ready-to-wear clothes, even gives her model homework: “Just practice it at home.”

SEEOh where, oh where is Swatch, the Mood mascot on Season 17?

The model says nothing, but she looks less than pleased with the reprimands.

Instead, fellow designer Garo Sparo — who teamed with Nadine and Hester Sunshine on last week’s futuristic challenge — chimes in with some insight: “Nadine has a very strong way of looking at things, and I don’t know if she will have the patience for her model. I’m worried about that.” She certainly didn’t have the patience for Hester when she declared her to be “Freddy Krueger” after the off-beat designer borrowed her fabric and then cut it up without even using it.

In our Gold Derby poll, 93% of “Project Runway” fans decided that Nadine was right in her treatment of Hester, who admitted she was no team player. But the model was not the problem here. It’s the design. For now, let’s give Nadine the benefit of a doubt, especially since she might be the one going home to practice her skills this week.