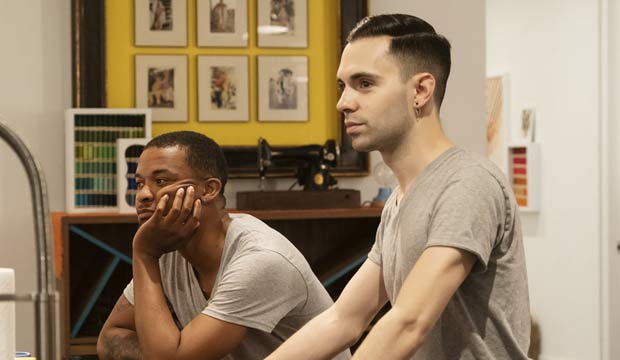 I’ll admit, I was scared when Karlie Kloss introduced a challenge inspired by the upcoming movie musical “Cats” on this week’s “Project Runway.” A fashion version of the uncanny-valley looks we saw in the movie’s trailers gave me serious pause. Luckily, the challenge wasn’t to create looks inspired by “Cats,” but by cats … or dogs, fish, snakes, giraffes or any other creatures that inspired the designers. Their mission was to create chic streetwear looks with animal prints. But there was arguably more drama during the challenge than there was on the runway. So who was in, and who was out? Read on to find out.

Don’t “die young,” Dayoung! Designer Dayoung Kim was much harder on herself last week in “Blast Off” than she needed to be, even though her look landed her in the bottom of the judges’ scores. It turns out she was being even harder on herself than she realized. Before the second challenge was even announced, she was taken away from the penthouse in an ambulance experiencing aches, dizziness, and even feeling somewhat dissociated from her body. She later revealed that she was suffering from exhaustion and needed to take better care of herself. she even joked that she was going to “die young.”

Self-care is priority number-one, Dayoung! You can’t design if you can’t even stand, so she should take a page from her partner last week, Alan Gonzalez, who took a time out from the challenge to eat macaroons and this week excused himself to get some fruit snacks. Christian Siriano wasn’t too thrilled with Alan taking time out to satisfy his sweet tooth while his design still looked like Yoda-wear, but I’m not gonna lie, during this beastly print challenge, Alan was my spirit animal.

The good news for Dayoung, and for humanity as a whole, is that while she only had one day to complete this two-day challenge after spending the first day recovering, her fellow designers helped her complete her tiger-inspired look — except for Delvin McCray, who finished his look early but was content to let the other designers be selfless while he kicked back. I understand that this is a competition, but they’re all facing the same pressures, so I much prefer to see generosity between the designers than cattiness — no pun intended.

Not everyone is impressed with Saint Sergio. But while Delvin is certainly not lacking for confidence (finishing early, flaunting his free time), he’s got nothing on Sergio Guadarrama, who continues to insist on his inherent superiority, not just to his fellow designers but to most people who wear clothes. He decided to create a mature woman’s gown for this streetwear challenge, and when Christian called him on that curious choice, Sergio argued, “Young people can’t afford expensive things, so why design for them?”

So Sergio Antoinette doesn’t think the poors deserve to wear his clothes, which would be callous under most circumstances, but especially in 2019 when young people trying to get ahead are saddled with unprecedented student loan debt. Let them wear cake, I guess.

And when Sergio’s definitely-not-streetwear gown went down the runway, beautiful though it was, he insisted that his work was so much more advanced than his competitors that “I’m probably never going to be in the bottom.” Indeed, he wasn’t in the bottom this week, though I think he should have been given his flagrant disregard for the challenge.

I suspect the show is emphasizing his arrogant comments to set him up for a comeuppance down the line. As it is, not everyone is as convinced of his greatness as he is. After hearing Sergio explain the political message of his look — that we’re not taking care of the planet and will soon be left with animal prints but no animals, an idea not remotely conveyed by his only-rich-people-allowed gown — Tyler Neasloney suggested that Sergio came onto the show “with a character to play, and I’m naming that character Saint Sergio.” I think Tyler’s BS detector is well calibrated.

SEE‘Project Runway’ season 18 premiere recap: ‘Blast Off’ gave us intergalactic fashion, but who was jettisoned into space? [UPDATING LIVE BLOG]

Geoffrey Mac still can’t get it together. In the season premiere he was flustered while shopping for fabric at Mood, second-guessed himself constantly … and then delivered one of the best looks of the challenge. You’d think that would have given him confidence going into week two, but it didn’t take too much to trigger another crisis of confidence. Christian suggested that his caftan idea wasn’t street enough for the challenge, and his response was the opposite of Sergio’s: he took it too much to heart, so he was flustered at Mood and second-guessed himself constantly yet again, but this time the outcome wasn’t as favorable.

I wish Geoffrey and Dayoung could borrow some of Sergio’s confidence so Sergio could have some of their humility. Geoffrey is better than he’s giving himself credit for.

Victoria Cocineru’s model looks like a “stewardess for Air Wakanda.” This week’s best critique came not from the judges, but from model Christina, who was crisscrossed in straps with a bow on her shoulder feeling like she should be flying the friendly skies of the Marvel Cinematic Universe. I admire Victoria’s bold, unique perspective, but last week’s bifurcated look in two fabrics and this week’s wild geometry walk such a fine line that I worry she has the potential to go horribly wrong sometime soon.

And her stubborn insistence on making a bright yellow bag to accompany her look — which didn’t really add much to the final look and took time away from properly finishing her garment — makes me worry that she could land at the bottom or at the top just as easily in any given week. On one hand, that’s reminiscent of Hester Sunshine last season, who made the finals even though she went wild every time, but on the other hand I already had a better sense of Hester’s aesthetic even this early in the competition. I’m not sure all of Victoria’s ideas are cohering quite as well yet.

THE BEST LOOKS: It turned out to be a good week for Victoria, who had one of the best looks according to the judges’ scores, though it wasn’t a unanimous decision. Brandon Maxwell thought it looked like a snake got tangled in toilet paper, and as for the streetwear challenge, it was “definitely on a street leading right into somewhere with liquor.” Nina Garcia also warned her that she needs to pay more attention to the execution of her many ideas. But guest judge Marni Senofonte could imagine Serena Williams playing tennis in it. I’m not sure what tennis matches Marni is watching, though.

Victoria had one of the top looks, but the judges quickly agreed that she wasn’t in the top two. The best of the week was a battle between Delvin and Marquise Foster. Delvin got credit — and well deserved — for deviating from the leopard/snake prints that the rest of the competitors gravitated towards. All those similar color schemes made so many looks on this week’s runway blend together for me, so Delvin’s pop of bird-feather green was rightly lauded as “timeless but fresh” by Karlie and “refreshing and chic” by Elaine Welteroth. He may come off as too cocky sometimes with that French atelier’s lab coat, but he puts his money where his mouth is.

But Marquise was the winner of the challenge. It was the only look Elaine could see on a modern woman in New York City. Or a modern man, for that matter because both Marni and Brandon said it was something they would wear. He took a risk by combining different animal prints for his top, which Nina Garcia said could have been a disaster but turned out modern. This was the first time we really got to know Marquise, who didn’t get much screentime in the season premiere episode, but he was comfortable with this challenge right off the bat. We should have known he would win since he was already wearing a leopard print shirt before the challenge was even revealed.

THE WORST LOOKS: For the record, I didn’t think any of this week’s “worst” looks were all that bad, especially compared to last week’s bottom two — the double-eliminated Asma Bibi and Jenn Charkow, though I liked elements of their designs too. Tyler’s drop-crotch look was “too costumey” for Nina, and Elaine thought it was “a little bit Spice Girls.” Tyler had his model do a gimmicky karate punch at the end of the runway, which probably didn’t help the judges’ perceptions. But the judges all agree that his look was well constructed, so his “quality and attention to detail” kept him in the competition.

It was Geoffrey and Veronica Sheaffer who landed in the bottom two. So Geoffrey has gone from the top to the bottom in the space of week. He has a lot of ideas, but Nina said, “it’s not really working.” Marni thought better styling could have saved it — none of the judges particularly liked the choker he paired with it. But they appreciate that the look was finished. He narrowly survived elimination, and I’m glad because I actually liked the hooded caftan he created, though the straps across the front did show he was overthinking things.

That meant it was Veronica who was eliminated, and she couldn’t blame the judges since she herself was unhappy with her look, complete with chiffon bloomers that she was worried looked like a diaper. Brandon called it just that. Elaine thought the look was unfinished. Nina was confused by the silhouette and styling. But Marni actually gave the look high marks. That wasn’t enough, though, to save Veronica from the chopping block.

“I wish that being away had made it more worthwhile,” said Veronica, who took time away from her children to compete on the show. Earlier in the episode she was emotional when she made a video call to her kids, and that should have tipped us off that she would be going home. Talking about being homesick and missing your family is the “Project Runway” equivalent of talking about your upcoming retirement in an action movie — you’re about to be tragically killed off. But she hopes she did her children proud even though she didn’t make it very far in the competition. I’d say she definitely did.

The good news for her, depending on how you look at it, is that she won’t have to brave next week’s dreaded unconventional materials challenge, a favorite of mine but the bane of many designers. Who do you think will stay, and who will go during that dautning challenge?