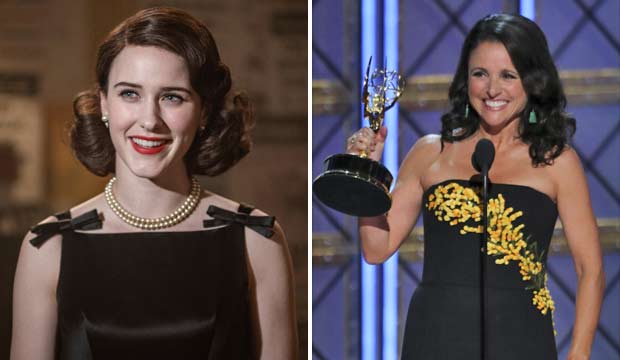 Rachel Brosnahan (“The Marvelous Mrs. Maisel“) had the good fortune of arriving at the Emmys last year when “Veep” was on an extended hiatus. That opened the door for her to take Best Comedy Actress, a category Julia Louis-Dreyfus has never lost for “Veep.” But “Veep” returned this year for its final season, which means Louis-Dreyfus can pick up right where she left off, right? Maybe not. One of the Expert journalists we’ve polled thinks the defending champ will hand Louis-Dreyfus her first (and only) loss in the role of self-serving politico Selina Meyer.

Our predictions at Gold Derby are calculated by combining the forecasts of thousands of users handicapping the awards here in our predictions center, and make no mistake, Louis-Dreyfus is still the overwhelming favorite to win again after her unprecedented six-year sweep of the category (2012-2017). She gets leading odds of 7/2, and out of the 15 Experts from top media outlets currently making their picks, 14 of them are anticipating on a lucky seventh win for the actress. But Robert Rorke (New York Post) is boldly betting on Brosnahan to win again, and maybe he’s onto something.

The Emmys love repeat winners, but the last time someone came back to win Best Comedy Actress for a role after a gap year was Candice Bergen (“Murphy Brown”), who won her third Emmy in 1992, lost in 1993, and then won her fourth and fifth Emmys in 1994 and 1995. This case is different, however, since Louis-Dreyfus wasn’t eligible last year when Brosnahan won, so unlike Bergen she hasn’t lost a race for playing this role. Still, it has been 25 years since Emmy voters went back to a previous winner in this category after moving on to a new one.

Also, “The Marvelous Mrs. Maisel” was more dominant at last year’s Emmys than “Veep” has ever been. “Maisel” won eight awards last year, a new record for a comedy in a single year. The most “Veep” has ever won in a single year is five, which it achieved in both 2015 and 2017. So maybe “Maisel” is more of a returning favorite than “Veep” is. Time will tell since the two shows have never gone head-to-head at the Emmys until now.