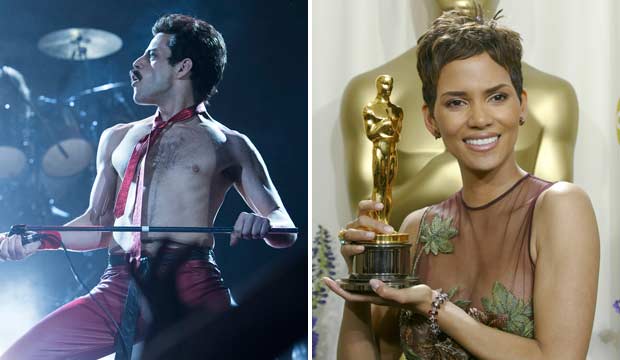 On Sunday night, Rami Malek won the Oscar for Best Actor for his performance as rocker Freddie Mercury in “Bohemian Rhapsody.” This was his first win on his very first nomination, and it wasn’t too long ago that he achieved the same feat at the Emmys, winning Best Drama Actor on his first try for “Mr. Robot” (2016). An actor winning both awards on their first try is uncommon. But winning both on your first try for leading roles? No one has done that since Halle Berry.

The last actor to have beginner’s luck at both awards was Allison Janney. She won the first of her seven Emmys on her very first nomination for “The West Wing” (2000), and last year she followed that up with her first Oscar nom and win for “I, Tonya” (2017). Both of those awards were for supporting roles.

Patricia Arquette was a first-time nominee and winner at both events too. She surprised pundits by claiming the Emmy for Best Drama Actress for “Medium” (2005), but her Best Supporting Actress win for “Boyhood” (2014) came as no surprise at all. She swept that awards season for her role as the mother of young man who grows up before our eyes.

SEERami Malek (‘Bohemian Rhapsody’): Freddie Mercury fought for us to be who we really are [WATCH]

But it had been almost two decades since anyone has made such a first impression at both awards as a lead actor. Berry took home an Emmy for Best Movie/Limited Series Actress for playing the title role in the HBO telefilm “Introducing Dorothy Dandridge” (2000). Not long after that she won the Best Actress Oscar for “Monster’s Ball” (2001).

Berry’s Oscar victory was also historic because she was the first (and still the only) black winner in Best Actress history. Similarly, the Egyptian-American Malek’s Best Actor victory was the first for an actor of Arab descent. So Malek made a rare Oscars impact in more ways than one.