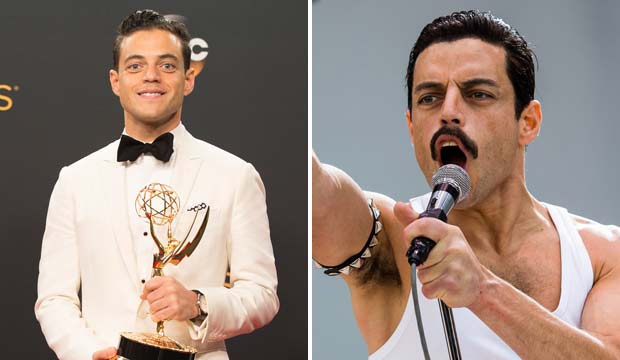 It’s not uncommon for actors to have won both Oscars and Emmys, especially in the current era of peak TV. But it’s particularly impressive to win on your first try. And it’s rare to win both on your first try. Rami Malek could be the latest to pull off that trick: he won Best Drama Actor at the Emmys for “Mr. Robot” (2016) on his career-first bid, and he may be on the cusp of winning Best Actor at the Oscars on his rookie nomination for playing Queen frontman Freddie Mercury in “Bohemian Rhapsody.” Talk about beginner’s luck.

Patricia Arquette pulled it off too. She was a surprise Emmy winner for Best Drama Actress for the psychic detective series “Medium” (2005). But it came as no surprise when she won Best Supporting Actress at the Oscars for “Boyhood” (2014); she had been the front-runner all season long for that film.

Forest Whitaker claimed both, though only one was for acting. He prevailed at the Emmys for Best TV Movie as a producer of “Door to Door” (2003), and then he ruled over the Oscars with an iron fist by taking Best Actor honors as dictator Idi Amin in “The Last King of Scotland.”

SEEOscars 2019: Why Rami Malek (‘Bohemian Rhapsody’) could be this year’s Sandra Bullock (‘The Blind Side’)

You have to go back almost two decades to find an actor who won both awards on their rookie nominations and both times as a lead, as Malek would do if he’s successful at the Oscars. Halle Berry took home an Emmy for Best Movie/Limited Actress for playing the title role in the HBO telefilm “Introducing Dorothy Dandridge” (2000). Not long after that she won the Best Actress Oscar for “Monster’s Ball” (2001).

Malek may be well on his way to that Oscar. Though “Bohemian Rhapsody” had mixed reviews, it was a surprise blockbuster, and it has been a hit on the awards scene. Malek won a Golden Globe for his performance, and he just won a SAG Award, which is even more crucial. The lead-actor winner at the SAG Awards has gone on to win the Oscar 19 out of 24 times (79%). And Malek could win the BAFTA Award next since he’s playing a British icon. That might make him damn near indomitable. Fitting for an actor playing the man who sang “We Are the Champions.”