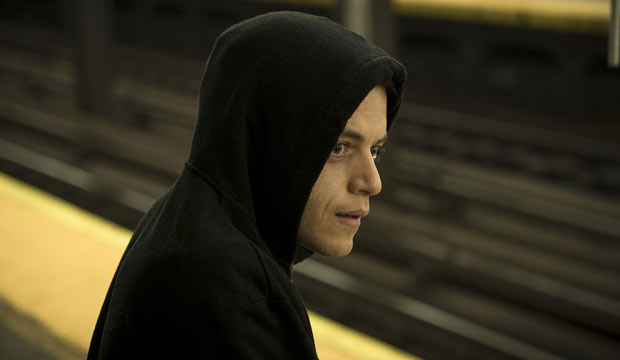 Rami Malek certainly isn’t wanting for trophies. Over the 2018-2019 movie awards season he claimed Golden Globe, Screen Actors Guild and BAFTA Awards for playing Freddie Mercury in “Bohemian Rhapsody” — the Oscar too, of course. But his awards track record was more hit-and-miss for his star-making performance in “Mr. Robot,” which is currently airing its fourth and final season on USA. He won the Emmy, but never won a Globe or SAG Award for it. Will those groups make it up to him now?

Even after he won his Oscar our readers thought Malek’s greater achievement was his TV performance as unstable hacker Elliot Alderson in “Mr. Robot.” But when he first arrived at the Golden Globes he was left out of the party. The show earned three nominations in 2016 and won Best Drama Series and Best TV Supporting Actor (Christian Slater). The only category it lost was Best TV Drama Actor for Malek; instead, voters gave a farewell hug to Jon Hamm (“Mad Men”). Malek was nominated in 2017 too, but that time he lost to an actor on a brand new show: Billy Bob Thornton for “Goliath.”

Malek also earned SAG nominations for “Mr. Robot” in 2016 and 2017, but the guild opted for a couple of politicos. Kevin Spacey won in 2016 for playing the fictional Frank Underwood on “House of Cards” (I imagine many voters would take that one back if they could). Then John Lithgow won in 2017 for playing Winston Churchill in “The Crown.”

“Mr. Robot” mostly fell out of favor with awards groups after that, so Malek didn’t get his revenge until his rock-star performance in “Rhapsody” brought the house down throughout last season’s Oscar race. But now the final season of “Robot” is underway and Malek is coming in as a newly minted Oscar winner. Will Globe and SAG voters tip their hats to his breakthrough performance now, or will they feel he was duly awarded during his “Rhapsody” romp?