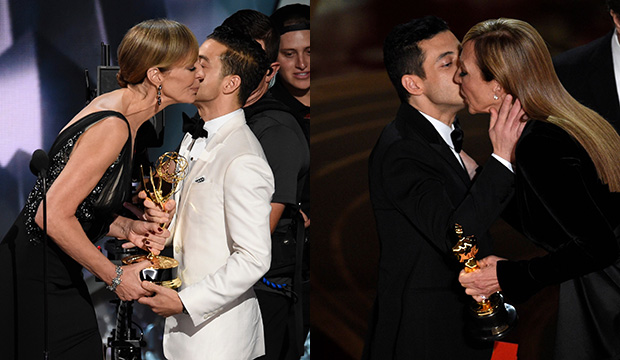 Allison Janney is Rami Malek‘s good luck charm. The Oscar winner presented the Best Actor Oscar to Malek (“Bohemian Rhapsody”) on Sunday alongside Gary Oldman, nearly two and and a half years after she handed off another statuette to him, the Emmy.

At the Primetime Emmy Awards in 2016, Janney, who has seven Emmys of her own, was tasked with presenting Best Drama Actor, which went to Malek for his breakout performance in “Mr. Robot” (watch below). Malek beat out heavyweights and mainstays Kyle Chandler (“Bloodline”), Bob Odenkirk (“Better Call Saul”), Matthew Rhys (“The Americans”), Liev Schreiber (“Ray Donovan”) and Kevin Spacey (“House of Cards”). Many thought Spacey would finally win his first Emmy with Bryan Cranston (“Breaking Bad”) and Jon Hamm (“Mad Men”) out of the way, but he got hacked by the newbie.

Janney typically wouldn’t have presented the Best Actor category — and almost didn’t have the chance to present at all. Trying to compensate for the lack of a host, producers reportedly did not want last year’s four acting champs to present, hoping to book “bigger” stars instead, which was frankly very rude to Janney, Oldman, Frances McDormand and Sam Rockwell. Backlash forced them to change course, just like with every other idea they had this year.

Had producers maintained the usual tradition of the previous year’s acting champs presenting the opposite gender category, Janney would not have given the Oscar to Malek. (She would’ve, however, presented the Oscar to Best Supporting Actor winner and “Green Book” star Mahershala Ali, who presented the Oscar to her last year.) But the reigning lead and supporting champs of the opposite gender were paired to do the lead races, which also gave us a “Three Billboards Outside Ebbing, Missouri” reunion between McDormand and Rockwell, who did Best Actress.

So now that Janney’s been there for Malek’s E and O, it’s only right that she completes the Presenter EGOT and give him his G and T too.