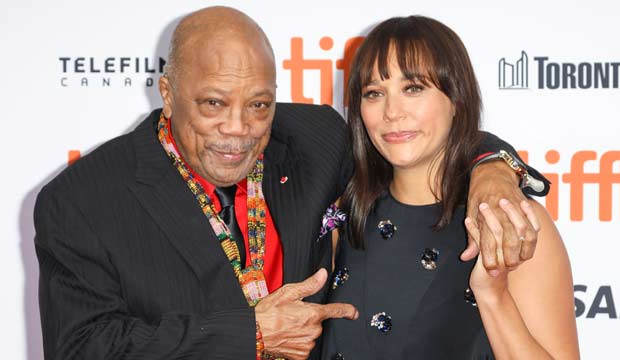 Musician and producer extraordinaire Quincy Jones has won 27 Grammys over the course of his career, which ties him with country singer Alison Krauss as the second most awarded person in the awards’ history. This year he could add to that total, and he would be joined by his daughter Rashida Jones. They’re nominated together for Best Music Film for “Quincy,” the Netflix documentary about his life.

Quincy Jones has won Grammys for some of the most famous recordings in music history, including Album of the Year for Michael Jackson‘s “Thriller” (1984) and his own “Back on the Block” (1991), plus Record of the Year for Jackson’s “Beat It” and the USA for Africa collaboration “We Are the World.” But this is his first nomination in 17 years. He was last nominated in 2002, when he picked up a bid for Best Instrumental Arrangement for “Soul Bossa Nova” and won Best Spoken Word Album for “Q: The Autobiography of Quincy Jones.”

His daughter Rashida Jones, meanwhile, is best known for her work as an actress in shows like “Parks and Recreation” and “Angie Tribeca,” as well as films including “I Love You, Man” and “The Social Network.” But then she ventured into directing, starting with the 2013 music video for Sara Bareilles‘s Grammy-nominated song “Brave.”

She followed that up with an episode of her series “Angie Tribeca” and also ventured into documentaries. She earned an Emmy nomination in 2015 for producing “Hot Girls Wanted” about young women drawn into pornography. Then in 2018 she and co-director Alan Hicks helmed “Quincy.” It has already won a Critics’ Choice Documentary Award for Best Music Documentary, and now she could join the family business of winning Grammys.

SEEWill Bjork FINALLY win a Grammy, or lose for the 15th time?

But Quincy Jones isn’t the only music legend in the running in the crowded race for Best Music Film. This documentary is up against biographical docs about Eric Clapton (“Life in 12 Bars”), Whitney Houston (“Witney”), Itzhhak Perlman (“Itzhak”) and Elvis Presley (“The King”). Can one of them keep up with the Joneses?