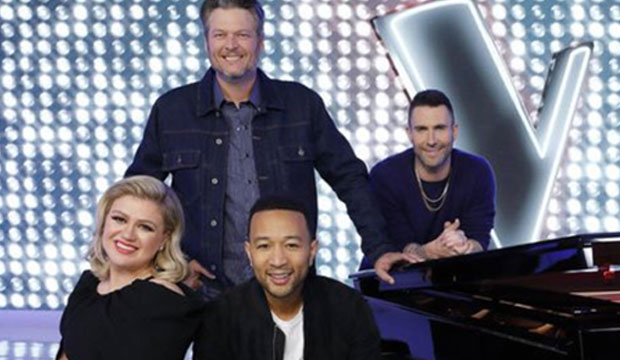 John Legend certainly didn’t suffer from beginner’s nerves as a coach on Monday’s premiere of season 16 of “The Voice.” We want to know where you rank this EGOT winner among the lucky 13 music superstars to serve as coaches on this reality competition series. After you rate him in our poll below be sure to sound off with your thoughts on the show in the comments section.

Legend is just that in the music business and he was not afraid to express his strong opinions about the would-be singers on “The Voice.” He held his own against both Blake Shelton and Adam Levine, who have been coaches on the show since it began, as well as Kelly Clarkson who is coming off back-to-back wins.

Legend replaces Jennifer Hudson, who was a coach on both season 13 and 15. She proved to be unlucky in her debut, just missing out on a place in the final when Noah Mac was the last of the Top 8 to be eliminated. That season marked the sixth win for Shelton as Chloe Kohanksi took the title.

Levine, the Maroon 5 frontman, had the same beginner’s luck as Clarkson. He coached Javier Colon to victory on the first season. While he has won twice more (Tessanne Chin, season 5; Jordan Smith, season 9), he had to sit on the sideline in season 15 as none of his artists made the final.

Is one of these your favorite coach of all-time? Or do you prefer one of the other original coaches – Christina Aguilera — who had to wait till season 11 before her first and only (to date) win? Other one-time winning coaches were Usher (season 6), Pharrell Williams (season 8) and Alicia Keys (season 12). And don’t forget these four coaches who may never have had the winning contestant but still made the show must see TV: Miley Cyrus, Cee Lo Green, Shakira and Gwen Stefani.