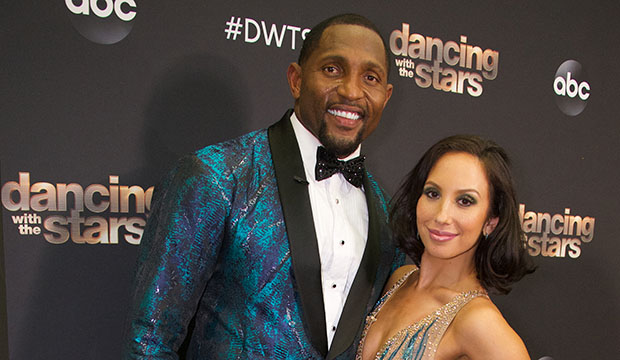 Ray Lewis and Cheryl Burke withdrew from “Dancing with the Stars” on Monday after the former linebacker re-aggravated a toe injury he first suffered nine years ago in a game, but unsurprisingly, it was not an easy decision to make.

“We went back and forth on the phone a thousand times because I really wanted to push through. I just wanted to figure it out,” Lewis told “Entertainment Tonight” (watch below). “I have been dealing with the pain for few weeks and once I got the MRI, it was confirmation. ‘OK, reality just got real.’ I called my mom and she was like, ‘This time you need to follow your heart and not your head.’ But it was just hard because I finish things.”

The two-time Super Bowl champ said he dealt with the pain for two weeks, but he knew something was wrong when the pain suddenly became sharp and traveled up his leg and back. On Monday’s episode, he was shown going to the doctor, who informed him that he tore three tendons and required surgery. “The silver lining in this is I don’t find this doctor if I never do this show,” Lewis said, looking on the bright side. “I’ve lived like this since 2010 with a broken toe and now I can address that. So, for me, I’m excited.”

SEE ‘Dancing with the Stars’ recap: Who was Oscar-worthy on Movie Night?

Season 24 “Dancing” champ and fellow football player Rashad Jennings subbed in for Lewis on the show and performed a cha-cha to the Beatles‘ “Twist and Shout” with Burke. But Lewis hopes he can return to the dance floor one day. “I’ve been telling people, ‘I really want to do this show again,'” he declared. Burke, who had to get an MRI herself for her rotator cuff tendonitis, suggests a season of just celebrities who’ve had to withdrew due to injury.

“We need to do a season of injuries, like all the injured celebrities. There’s been, like, Jewel, Nancy O’Dell,” she said. “There’s been a lot. People have had to bow out.”

Alan Bersten on those endless Hannah Brown dating rumors: 'We shut it all out' on 'Dancing with the…

ABC boss defends Sean Spicer's casting and prolonged run on 'Dancing with the Stars': 'It's a ballroom…

'Dancing with the Stars' is eyeing these celebs for Season 29 -- and be warned, political figures are…

Witney Carson on 'Dancing with the Stars' being a popularity contest: 'That's just something that you…

James Van Der Beek deserves a second chance on 'Dancing with the Stars,' and so do these 12 other…

Cheryl Burke: 'Dancing with the Stars' is 'not authentic to what the show is anymore'

We explain how to fix 'Dancing with the Stars' - you're welcome, ABC [WATCH]