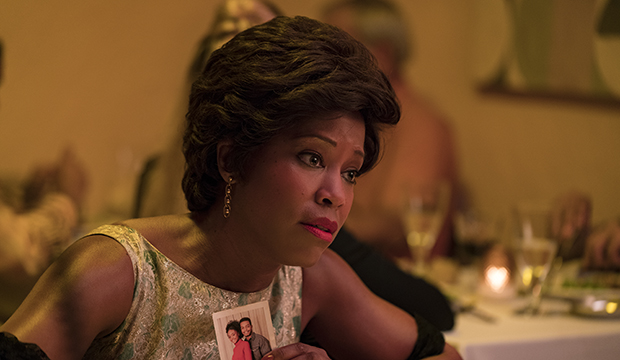 Regina King has won three Emmys (twice for her supporting work “American Crime” and one for her leading role in the miniseries “Seven Seconds”). She’s already won a Golden Globe and a slew of critics awards for her scene-stealing performance as Sharon Rivers, the non-nonsense matriarch at the center of the action in “If Beale Street Could Talk.”

And she is a strong contender at the Oscars for her work in Barry Jenkins‘ follow-up to “Moonlight.”  The veteran actress readily acknowledges her gratitude for being this chance. “Barry did a lovely job of showing that Sharon, while she is strong, while she is loving, she is still scared, she still has fears.”

She speaks enthusiastically of newcomer Kiki Layne, who plays her on-screen daughter Tish. “Kiki is the daughter that I’ll never have,” says the actress. “I can’t wait to see what she does and what the universe has in store for her. She is so committed to her art form. I feel lucky that this was her first film – that Barry put her around people who are professionals, who respect the set and the art form. On ‘Beale Street,’ she was on a set where everyone gave 150% and I am so proud to have been a part of that.”

And King is proud of the reaction that the film is generating. “My son said it was the first time he saw himself. I didn’t realize that men don’t get the opportunity – that was such a tragic thing to happen to Fonny [Stephan James]. Men don’t get to see themselves sensitive and strong at the same time. It’s looked down upon. Most of the strongest, well-liked men I know are sensitive. I didn’t realize how much we needed to show that. I’m so happy we [“Beale Street”] did.”

SIGN UP for Gold Derby’s free newsletter with latest predictionsWhile she was thrilled to get an Oscar nomination, she was disheartened that the film did not. “I would have loved for the film to be nominated [for Best Picture], it is a timeless piece of cinema,” says King. “It is an honest depiction of the human experience. So there is disappointment, but it does not take away from the fact that I was lucky enough to be apart of this piece of art.”

She does take some solace from that one of her favorite movies of the year, “Black Panther,” did receive a nomination. Would she like to be involved in the sequel? “For sure, I’d love to be in ‘Black Panther Two!’ Who wouldn’t? ‘Black Panther’ and ‘Spider-Man: Into the Spider-Verse’ are both something we’ve never seen before,” says King. “It’s so great for young girls and boys to see themselves as heroic. The beautiful thing is that, somehow, black and brown children manage to feel like heroes anyway – but to actually see themselves on screen that way is huge.”

Personally, I think she’d be an interesting choice for a villain – something we’ve not seen her do before and something the MCU hasn’t really done before. Kevin Feige, you heard it here first.

PREDICT the Oscars now; change them until February 24Be sure to check out how our experts rank this year’s Oscar contenders. Then take a look at the most up-to-date combined odds before you make your own Oscar predictions. Don’t be afraid to jump in now since you can keep changing your predictions until winners are announced on February 24.