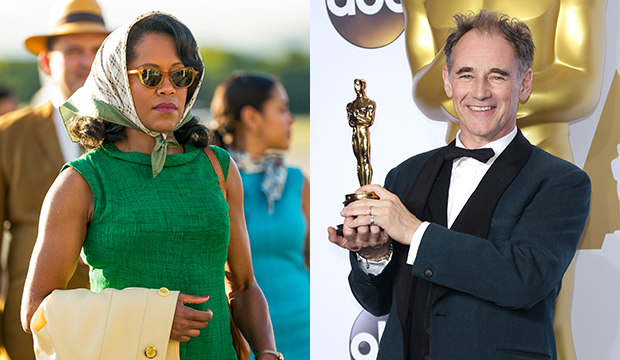 Emily Blunt‘s shocking supporting actress win for “A Quiet Place” at Sunday’s Screen Actors Guild Awards gave us all déjà vu. Is this race really going to unfold the way the Best Supporting Actor Oscar race did three years ago? You know, when the ostensible frontrunner and Golden Globe and Critics’ Choice winner (Sylvester Stallone for “Creed” / Regina King for “If Beale Street Could Talk”) gets snubbed at SAG and BAFTA; the SAG goes to an Oscar snubbee (Idris Elba for “Beasts of No Nation” / Blunt); and the Oscar goes to the BAFTA winner (Mark Rylance for “Bridge of Spies” / TBD).

History does repeat itself (Annette Bening says hi), but King and her fans should feel good about her not becoming the next Sly. While the surface similarities are uncanny, there are quite a few things that work in her favor — seven in fact.

1. She was the critical darling
King needs to buy a new shelf for all the critics awards she won in the fall, including the Big Three, New York Film Critics Circle, Los Angeles Film Critics Association and National Society of Film Critics. Stallone, on the other hand, was not the critical favorite, getting a handful of regional mentions. Nope, the critics’ pick was Rylance himself, who won NYFCC and NSFC, and bagged a bunch of second tier ones as well, like Boston Society of Film Critics. King is the Rylance when it comes to critical love, and she’s in a better position than he was since she actually swept.

2.  She’s not the sole nominee of her film
Sure, “Beale Street” has underperformed all season and King is the only supporting actress contender whose film is not up for Best Picture. But it does have two other nominations, Best Adapted Screenplay and Best Original Score, and it might also win the latter, so there’s a wee bit of support there. Stallone was also the only nominee whose film wasn’t nominated for Best Picture, but his was the lone nomination for his film. Christopher Plummer (“Beginners,” 2011) is the last supporting actor champ as his film’s only nomination, and he swept the season.

3. She’s respected and adored
Stallone doesn’t exactly have the best reputation in the biz, let alone the best cinematic output. But you’d be hard-pressed to find a negative story about King, whom all her collaborators and friends praise to no end. “I believe in @ReginaKing,” her “Leftovers” co-star Carrie Coon tweeted last month after King’s SAG Awards snub.

Under one of King’s Instagram posts in November, Octavia Spencer commented, “It’s your season, baby!!! I couldn’t be happier for you.”

So yeah, people love her, whereas people may love Rocky, but not Sly. King has also collected three Emmys in four years — all of which were surprise wins — which again puts her more on the level of Rylance, a highly regarded actor who already had three Tonys under his belt.

4. She’s up against two former winners
“The Favourite” stars Emma Stone and Rachel Weisz already have Oscars, and Stone’s win was just two years ago (though this is apparently not stopping Mahershala Ali from winning a second), so some voters might take them out of consideration because of that. The only former winner in Rylance’s field was Christian Bale (“The Big Short”), so King has fewer fellow non-winners to overcome.

5. She’s up against two people from the same film
Stone and Weisz are, duh, in the same movie, so they could split the vote, which would help King. There were no nominated co-stars in Rylance’s field, specifically not from his own film. And yes, co-stars have defeated each other before — Best Supporting Actress is the most prolific with co-star nominees — but in those instances, one person was the clear frontrunner from the beginning and dominated the season (see: Melissa Leo over Amy Adams for 2010’s “The Fighter”; Spencer over Jessica Chastain for 2011’s “The Help”). Such is not the case with Stone and Weisz.

6. There doesn’t seem to be passion for Amy Adams in “Vice”
Adams was long believed to be King’s biggest rival and beneficiary of her SAG and BAFTA snubs. She’s on her sixth nomination in 13 years, which at least numerically puts her in “overdue” territory. But the conversation around that narrative and her performance, despite “Vice”‘s eight nominations, has been quiet. She was unable to beat an Oscar snubbee at the SAG Awards and couldn’t even score a consolation win on the TV side for “Sharp Objects,” losing to Patricia Arquette (“Escape at Dannemora”).

Before you say Blunt got sympathy votes for her Oscar snub(s), SAG voting started on Dec. 18 and ended Jan. 25, three days after Oscar nominations were announced. So unless a ton of people were waiting until the last three days to vote, it’s highly unlikely her win was a response to getting blanked by the academy; “A Quiet Place” was purely a more widely seen and popular film, and Blunt is liked by that group, getting double nominations this year and three total in three years. In Elba’s case, SAG voting closed Jan. 29, 15 days after Oscar nominations were announced on Jan. 14 and #OscarsSoWhite was born. The backlash was loud and swift, and Elba took home two SAG Awards, the other for “Luther.”

7. Weisz, the predicted BAFTA winner, is going for her second win in the category on her second career nomination
Weisz is the frontrunner to take home the BAFTA (Brits are gonna Brit, you know?), which would make her the Rylance. But like we said, she is already an Oscar champ, for 2005’s “The Constant Gardener,” whereas Rylance was going for his first little gold man, just like King. People can obviously win multiple Oscars, but Weisz would be in super rare company in two ways: 1) She’d have a 2-for-2 record, which only six performers currently have and Ali will likely achieve with “Green Book”; and 2) She’d only be the third two-time Best Supporting Actress winner. This category has produced the fewest multiple winners, with the only double champs being Shelley Winters (1959’s “The Diary of Anne Frank,” 1965’s “A Patch of Blue”) and Dianne Wiest (1986’s “Hannah and Her Sisters,” 1994’s “Bullets Over Broadway”). But hey, maybe the secret is that your last name has to start with a “W.”