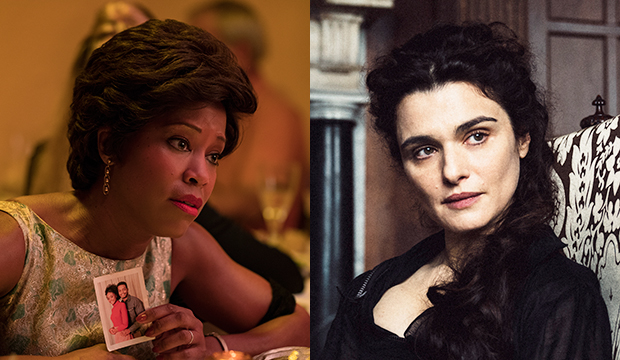 With just a few days left until the Oscars, Best Supporting Actress remains one of the most wide-open categories. The nominees are Amy Adams (“Vice”), Marina de Tavira (“Roma”), Regina King (“If Beale Street Could Talk”), Emma Stone (“The Favourite”) and Rachel Weisz (“The Favourite”), but our pundits believe this one is between King and Weisz. And for good reason: They’re the only ones who’ve racked up statuettes at televised precursors. So let’s take a closer look at them.

— After going 3-for-4 at the Primetime Emmy Awards, King is arguably one of the most popular and respected actresses in the industry, especially as all three of her Emmy wins were upsets. The key question is: Is she as beloved within the film academy as she is within the TV academy?

— She’s been the frontrunner from the start of the season, gaining early momentum with a whole bunch of critics wins, including the Los Angeles Film Critics Association and New York Film Critics Circle, and then adding the Golden Globe and Critics’ Choice Award. And one of voters’ favorite things to do is to rubber-stamp a win.

— While she doesn’t have all too much screen time in “Beale Street,” she is the heart of the movie as Sharon Rivers, who is determined to help her pregnant daughter (Kiki Layne) exonerate her wrongly convicted lover (Stephan James). It’s a classic mother role that often fares well in this category.

— She wasn’t even nominated at the Screen Actors Guild and BAFTA Awards – the two groups that have membership overlap with the academy. The exact same thing happened in Best Supporting Actor to Sylvester Stallone for “Creed” (2015), who was the projected frontrunner but ended up losing the Oscar to BAFTA winner Mark Rylance (“Bridge of Spies”).

— “Beale Street” has underperformed all season, ending up with just three Oscar nominations and not even cracking the Best Picture lineup. King is the only nominee whose film is not up for Best Picture and who also doesn’t have a co-star nominated.

— Like Rylance, Weisz has been nominated at every televised precursor and even took home the BAFTA; with the membership overlap, this could point to support for her performance, especially as she won over her co-star Stone. Her BAFTA win also occurred two days before Oscar voting started, so it was way more recent than King’s last televised win at Critics’ Choice on Jan. 13.

— “The Favourite” tied “Roma” for the most Oscar nominations, with 10 bids overall. Weisz could ride the wave of support for the movie all the way to a win.

— The role of Sarah Churchill, advisor and childhood friend to Queen Anne of Great Britain (Olivia Colman), allows Weisz to show off a range of emotion; she balances comedy with drama effortlessly. Weisz also has tons of screen time compared to King.

— “The Favourite” is a three-hander, and while Colman is competing in the lead category, Weisz has to compete against her co-star Stone and could face a potential vote-split. This may have happened at SAG, where non-Oscar-nominated Emily Blunt (“A Quiet Place”) took home the statuette.

— Weisz is already a Best Supporting Actress Oscar winner for “The Constant Gardener” (2005) and would only be the third actress to repeat in this category; Dianne Wiest and Shelley Winters have done it so far — Wiest was the last one to do so in 1995 for “Bullets Over Broadway.” Since King is on her inaugural bid, voters may feel more inclined to award her than give Weisz a second statuette.

In our combined Oscar odds, King holds an edge with 16/5 odds to prevail, as the majority of our Experts, Editors and Top 24 Users are sticking with her. Weisz is in second with 4/1 odds, with one Editor and five Top 24 Users backing her.

Be sure to check out how our experts rank this year’s Oscar contenders. Then take a look at the most up-to-date combined odds before you make your own 2019 Oscar predictions. Don’t be afraid to jump in now since you can keep changing your predictions until just before winners are announced on Feb. 24.