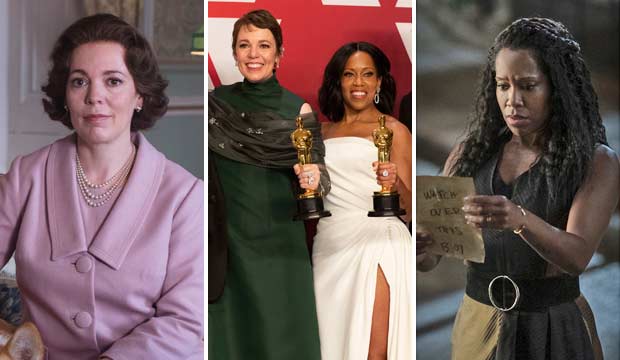 Earlier this year Olivia Colman and Regina King won Oscars for Best Actress in “The Favourite” and Best Supporting Actress in “If Beale Street Could Talk,” respectively. They both won Golden Globes for those performances too. But when the 2020 Globes come around the two women could find themselves going head-to-head since they’re both contenders for Best TV Drama Actress for their new roles on the small screen.

“The Crown” will premiere its third season on November 17 with Colman taking over Claire Foy‘s Globe- and Emmy-winning role as Queen Elizabeth II as the Netflix series advances its characters to the next stage of their lives. Royalty has certainly been good to Colman, who won that Oscar for playing another British monarch, the frail Queen Anne.

Meanwhile, King debuted in another high-profile fall drama, HBO’s take on the famous graphic novel “Watchmen.” Created by Damon Lindelof (“Lost,” “The Leftovers”), the series isn’t an adaptation of the novel, per se. It’s set in the same universe, but in present-day, imagining what the world would be like in 2019 after the events of that superhero epic. King plays Angela Abar, a Tulsa police officer who wears a mask to hide her identity after surviving a massacre that targeted law enforcement.

The Globes have already shown their love for “The Crown,” awarding it Best Drama Series in 2017, so we already know they’re fans of the show. But Globe voters tend to move on quickly from their past favorites, preferring to honor new and unrewarded programs. The good news for “The Crown,” however, is that with a brand new cast taking over it could feel to Globe voters like it’s brand new.

However, they might instead gravitate to a buzzy new show like “Watchmen,” though they’ve been skittish about genre programs. “Lost” won in 2006, but the closest thing to a sci-fi or fantasy show that has won Best Drama Series since was “The Handmaid’s Tale” (2018), a literary drama set in an eerily plausible dystopia. “Game of Thrones” hasn’t even won. Will they go for superheroes this time?

As of this writing Colman is the odds-on favorite to win the Golden Globe according to the combined predictions of over 1,500 Gold Derby users. She gets 17/5 odds, and she’s backed by 20 of our Top 24 Users who got the highest scores predicting last year’s Globe nominations, which gives their predictions extra weight. King isn’t currently among our top five predicted nominees, but she’s not far out, ranked seventh with 28/1 odds, and she could rise as “Watchmen” continues airing its episodes.

So will the Globes stage a clash of the Oscar titans by nominating both Colman and King for their followup performances?

Razzies fall from grace: Will Tom Hooper ('Cats') become the 3rd to go from Best Director to Worst…

'Pain,' but no glory: Pedro Almodovar's latest joins the list of great queer movies that lost at the…

Oscar season fatigue: Is it time for other awards groups to stop pledging fealty to the academy?

Will Robert Pattinson ('The Lighthouse') pull off an upset at the Independent Spirit Awards? These top…

The case for 'Jojo Rabbit': 5 reasons it could stealthily sneak away with Best Picture Oscar