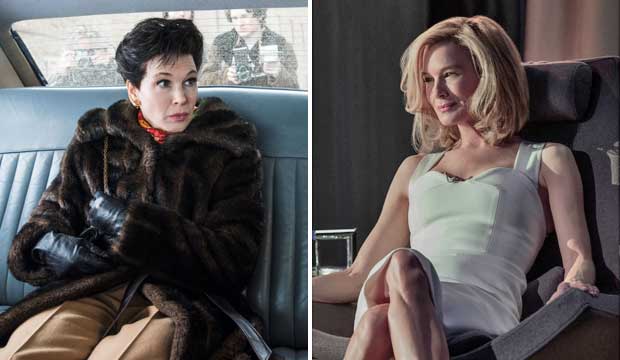 After years away from the spotlight Renee Zellweger made a comeback this fall with her performance as Judy Garland in the biopic “Judy,” but her comeback actually started several months earlier with her starring role in the Netflix limited series “What/If.” We already know she’s a Golden Globes front-runner for “Judy” (and the Oscars front-runner too), but could she get a surprise second Globe nom for her role on the streaming series?

Zellweger stars in “What/If” as Anne Montgomery, a ruthless venture capitalist who makes an indecent proposal to the young CEO of a biotech startup (Jane Levy): she’ll fund the business in exchange for one night with the CEO’s husband (Blake Jenner). As of this writing Zellweger ranks among our top 10 contenders for Best TV Movie/Limited Actress for this scenery-chewing performance, and Expert TV journalist Eric Deggans (NPR) is currently betting that she’ll crack the top five. So is one of our Top 24 Users who got the highest scores predicting last year’s Globe nominations.

This wouldn’t be the first time an actor got a boost for a TV role thanks to a standout performance on the big screen. Helen Mirren was nominated for three roles in 2007: for the film “The Queen” and the TV limited series “Elizabeth I” and “Prime Suspect: The Final Act”; she won for both “The Queen” and “Elizabeth I.” In 2014 Chiwetel Ejiofor was nominated for both the film “12 Years a Slave” and the TV limited series “Dancing on the Edge.” And earlier this year both Amy Adams and Regina King doubled up: Adams for “Vice” on film and “Sharp Objects” on TV, King for “If Beale Street Could Talk” on film and “Seven Seconds” on TV.

For that matter, Zellweger is already a Globes darling, with three victories out of six nominations (for “Nurse Betty,” “Chicago” and “Cold Mountain”). But has yet to be nominated for TV. How many times do you think Zellweger will show up in the Globe nominations this year?