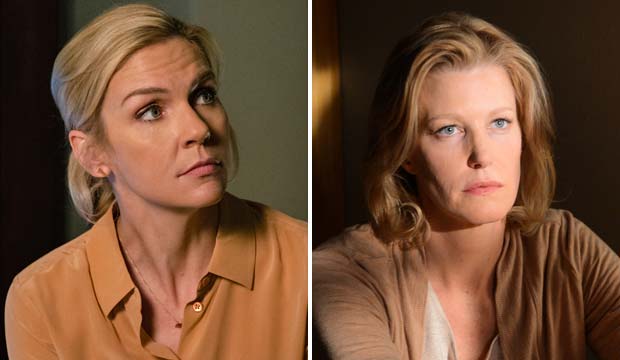 Is the fourth time the charm for Rhea Seehorn? Despite critical acclaim for her performance on “Better Call Saul,” the Emmys snubbed her for the first three seasons even though her co-stars Bob Odenkirk and Jonathan Banks have been nominated every year. But another actress in this same fictional universe had to wait until her fourth season to finally be nominated, and then she won: Anna Gunn for “Breaking Bad.” Now Seehorn could do the same.

“Breaking Bad” was exclusively a boys’ club in its first three seasons, winning Best Drama Actor for Bryan Cranston three times in a row (2008-2010) and then taking Best Drama Supporting Actor for Aaron Paul (2010). But Gunn was ignored for her work as Cranston’s wife, who gradually became aware of — and then became involved in — her husband’s illegal activities. But Gunn finally picked up her first nomination for season four in 2012, and then she won back-to-back in 2013 and 2014.

Could Seehorn follow the same trajectory to an Emmy nomination, and maybe an Emmy victory too for playing lawyer Kim Wexler in this “Breaking Bad” prequel series? She earned her first Critics’ Choice nomination for Best Drama Supporting Actress earlier this year, and she also picked up a bid at the SAG Awards as a member of the ensemble cast. On top of that, this year’s Emmy race for Best Drama Supporting Actress is wide open.

Of last year’s Emmy nominees in this category, the only one returning is Lena Headey (“Game of Thrones”). The other six spots were taken by performers from “The Handmaid’s Tale” (Yvonne Strahovski, Ann Dowd and Alexis Bledel), “Stranger Things” (Millie Bobby Brown), “The Crown” (Vanessa Kirby) and “Westworld” (winner Thandie Newton), but none of those shows will be eligible for consideration this year since none will have new episodes during this eligibility period.

That opening will result in Seehorn’s first Emmy nomination, according to the combined predictions of more than 1,000 Gold Derby users. She ranks fourth with 17/2 odds. But she may not have to wait another year for a win like Gunn did. She’s predicted to prevail by one of our Top 24 Users, who got the highest scores predicting last year’s Emmy nominations. Will she finally make the cut?