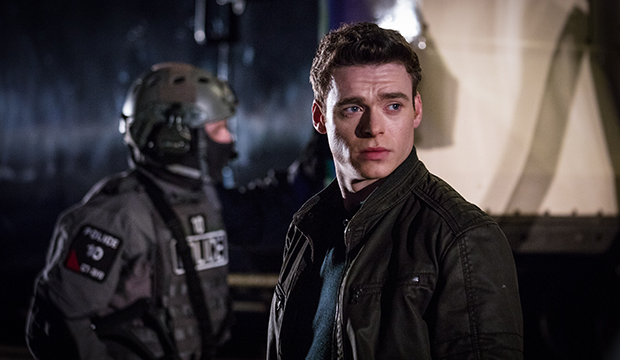 Richard Madden is currently poised to nab a Best Drama Actor Primetime Emmy Award nomination for playing David Budd in the BBC One/Netflix series “Bodyguard,” sitting in fourth place in our combined Emmy odds. He’s behind Jason Bateman (“Ozark”) in first place, Bob Odenkirk (“Better Call Saul”) in second place and Sterling K. Brown (“This Is Us”) in third place; Kit Harington (“Game of Thrones”) is in fifth and Milo Ventimiglia (“This Is Us”) in sixth. But here are five reasons why you may be underestimating Madden’s chances:

1. Accessibility and visibility
After its initial August-to-September run on BBC One, “Bodyguard”‘s six-episode first season was made available to audiences outside of the UK and Ireland on Netflix, which dropped the entire season on Oct. 26. Madden could benefit from wide-range visibility, given that the show is now easily accessible to Emmy voters.

2. It’s a showy performance
Budd is a Principal Protection Officer, who is assigned to protect Julia Montague (Keeley Hawes), the Home Secretary and Conservative Party Member of Parliament of Thames West. His traumatic experiences during the Afghanistan war have left him with PTSD and mistrust of most politicians. Madden expertly portrays Budd’s inner turmoil, having to be the always alert, obedient bodyguard to someone whose policies he strongly disagrees with. If the tape system were still in place, Madden would effortlessly win with his performance in the incredibly tense finale.

SEE An Emmy ‘Game of Thrones’: Kit Harington and Richard Madden could battle it out for Best Drama Actor

3. Precursor support
Having played fan-favorite Robb Stark on HBO’s behemoth “Game of Thrones,” “Bodyguard” isn’t necessarily Madden’s breakthrough turn, but it’s his most lauded performance to date. For the role, he’s already nabbed a Golden Globe Award win and a Critics’ Choice Award nomination for Best Drama Actor. Since an Emmy nom for “Bodyguard” would also be his maiden bid, having precursor support could be what it takes to tip him over the edge.

4. He could continue this Best Drama Actor trend
Since 2011, every Best Drama Actor champ has won for either a first or final season. The only other actor besides Madden in the projected top six who fits this mold is his former “Game of Thrones” co-star Harington, who’s contending for the show’s final season. Bateman is contending for the “Ozark”’s second season and Odenkirk is back with “Better Call Saul”’s fourth season, while Brown and Ventimiglia are competing for “This Is Us”‘ third season.

5. External factors
Emmy voters will get to see Madden on the big screen right before voting commences, when Dexter Fletcher’s Elton John biopic “Rocketman” hits theaters on May 31, in which Madden plays John Reid, the singer’s manager. With “Bodyguard” possibly being a distant memory, this movie could be exactly the reminder voters need.  Plus, with the final season of “Game of Thrones” currently airing, Madden could cash in some residual goodwill from his turn in that show.