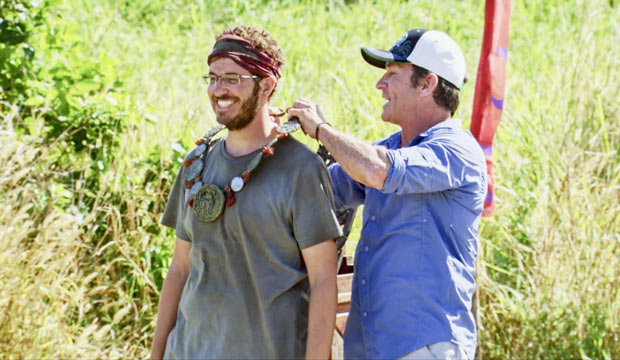 Even though Rick Devens leads Gold Derby’s predictions to win “Survivor: Edge of Extinction” on Wednesday, May 15, he still has insurmountable odds stacked against him. This Georgia newscaster has been the game’s number one target ever since returning from Extinction Island at the merge, but thanks to a combination of winning immunity challenges, finding hidden idols and making the right alliances at the right time, he’s managed to make it to the Top 5. (Well, the Top 6, considering that another eliminated castaway is about to return.) Will lightning strike for Rick or will his tribe mates finally get their wish by voting him out?

If Rick hopes to make it to the final tribal council, he’ll need to survive the next three eliminations. The good news is that he still has a hidden immunity idol in his pocket that can help him make it past the season finale‘s first vote. The bad news is that all of the remaining players know Rick has that idol since he flashed it last week when he bluffed that he was going to use it to save Julie Rosenberg. Even though he didn’t end up playing the idol, the threat was enough to keep Julie in the game and eliminate his rival Aurora McCreary.

As for the following two tribal councils, Rick won’t have anymore idols to fall back on and so he’ll have to rely on winning the challenges. Even though he doesn’t necessarily seem like a challenge beast — don’t forget, Kelley Wentworth lovingly referred to him as “dad bod” — Rick has already secured not one, not two, but three immunity victories so far. That’s more than anyone else in Season 38, so it’s possible Rick can enter those tribal councils wearing the immunity necklace.

Should Rick fail to win immunity at the Top 4, he’ll need to have one last ace up his sleeve in the form of fire. Presumably the winner of that challenge will choose to not take Rick with them to the finals, since he’d no doubt win in a landslide, so Rick will need to start working on his fire-making skills — like, yesterday. If he manages to build his fire first, he’ll earn his way into the Final 3 and get the opportunity to explain to the jury of 13 why he deserves to join the “Survivor” winners list.

As of this writing, Gold Derby’s readers favor Rick to win with 23/20 odds, followed by Lauren O’Connell at 51/20 odds, Gavin Whitson at 13/2 odds, Victoria Baamonde at 33/1 odds and Julie Rosenberg at 100/1 odds. As for who might return from the Edge of Extinction, readers predict either Chris Underwood or Joe Anglim will soon be earning their second chance.