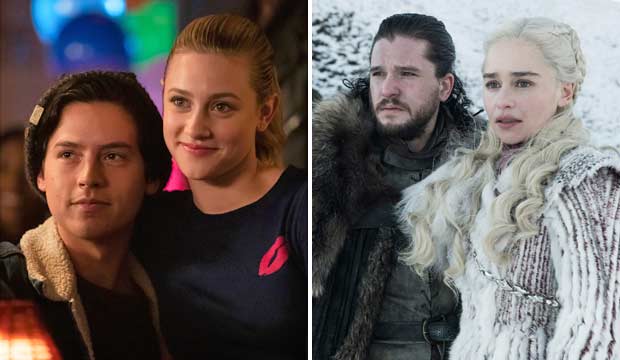 The MTV Movie Awards added TV to the mix in 2017, and in both years since then the award for Best Show went to “Stranger Things.” That Netflix series didn’t air during the past year, so it’s out of the running in the 2019 race, which seems like the perfect opportunity for the gargantuan “Game of Thrones” to prevail for the first time. But I’m not so sure about that. I think “Riverdale” might be the real sleeping giant in this race.

These awards are decided by fans voting for their favorites online, and perhaps surprisingly, “Game of Thrones” has never won. It lost all three of its nominations in 2017, and then it lost its three nominations again in 2018. That’s ironic when you consider that it’s one of the highest rated and most talked about shows on all of television and is also a darling of the industry, as evidenced by its dominance of the Emmys in recent years. When fans and industry elites actually agree on something, you’d think an open online vote would be a cinch.

But “Stranger Things” with its younger cast might have appealed more strongly to the demographic of fans more inclined to vote for the MTV Movie and TV Awards. That’s good news for “Riverdale,” which is so popular that it dominates kudos driven by younger fans. It swept all seven of its Teen Choice Awards categories in 2017. Then it swept all nine of its Teen Choice races in 2018. And it was named Favorite TV Drama at the 2019 Kids’ Choice Awards too. The CW series is also a proven winner at the MTV Awards, having won the 2018 Golden Popcorn for Madelaine Petsch as Best Scene Stealer.

When you also consider the fact that the current final season of “Game of Thrones” has proven highly divisive among fans — there was even a fan petition to remake the final season — that gives “Riverdale” a golden opportunity. It can sneak past the “Thrones” backlash and take it down like Arya against the Night King. What do you think? You can make your predictions right here in our predictions center.