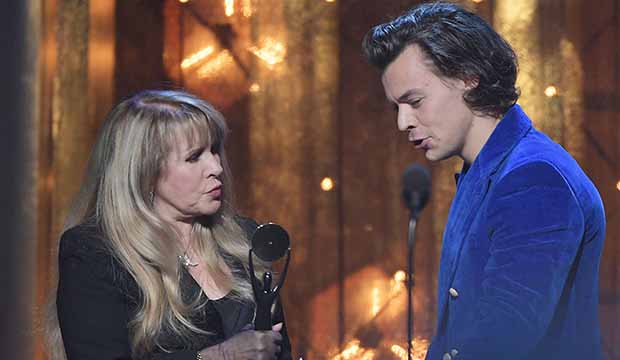 Seven new musical legends joined the Rock and Roll Hall of Fame in Brooklyn on March 29: The Cure, Def Leppard, Janet Jackson, Stevie Nicks, Radiohead, Roxy Music and The Zombies. That recorded 2019 ceremony is now airing on HBO tonight (April 27) and will continue to be available on the premium network’s on-demand listings for months to come.

Five of those artists performed at the event, but not Janet Jackson and Radiohead. She was reportedly upset over HBO airing “Leaving Neverland,” a hard-hitting documentary about her brother Michael Jackson, and backed out of singing that week (although she was there to accept the induction trophy). Several Radiohead members (Jonny Greenwood, Colin Greenwood, Thom Yorke) had indicated their apathy for the selection, so Ed O’Brien and Philip Selway were the only ones attending. Other recent inductees who refused to perform: Dire Straits (2018), N.W.A. (2016), Kiss (2014), Guns N’ Roses (2012), Genesis (2010), ABBA (2010) and Madonna (2008).

Here is a full rundown of every performer, every song and every performer you’ll see on tonight’s three-hour program for HBO (in order of presentation):

Harry Styles presenting Stevie Nicks
Songs performed were “Stand Back,” “Leather and Lace” (with Don Henley, “Stop Draggin’ My Heart Around” (with Styles) and “Edge of Seventeen.”

John Taylor, Simon Le Bon (Duran Duran) presenting Roxy Music
Songs performed were “Out of the Blue,” “Avalon,” and “Editions of You” (“Love is the Drug/More Than This” and “In Every Dream a Heartache” edited out of final program).

Susanna Hoffs (The Bangles) presenting The Zombies
Songs performed were “Time of the Season,” “Tell Her No” and “She’s Not There” (“This Will Be Our Year” edited out of final program).

Brian May (Queen) presenting Def Leppard
Songs performed were “Rock of Ages,” “Photograph” and “Pour Some Sugar on Me” (“Hysteria” edited out of final program).

Nicks was inducted along with Fleetwood Mac in 1998 and became the first female artist, this time for her solo career, to be inducted a second time. All four of The Beatles members (John Lennon, Paul McCartney, George Harrison, Ringo Starr) have been inducted twice. Just a few other men with this feat: Peter Gabriel (Genesis, solo), Michael Jackson (The Jackson Five, solo), Jimmy Page (Led Zeppelin, The Yardbirds), Paul Simon (Simon and Garfunkel, solo) and Neil Young (Buffalo Springfield, solo). Eric Clapton is the only person with three inductions (Cream, The Yardbirds, solo).