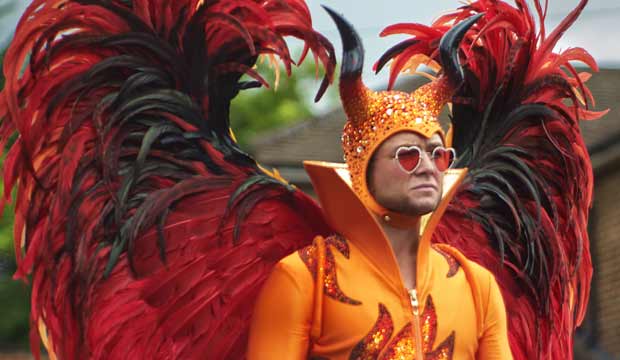 Paramount’s “Rocketman” has taken off as a major Oscar contender thanks to nominations at the Golden Globes and SAG. The musical biopic takes a fantastical look at the life and music of rock star Elton John (Taron Egerton), from his international breakthrough to his struggles with drug addiction. Gold Derby recently conducted video interviews with Egerton, director Dexter Fletcher, costume designer Julian Day, production designer Marcus Rowland, and makeup artist and hairstylist Elizabeth Yianni-Georgiou. Scroll down and click on any name below to be taken to their full chat.

Before he played John, Egerton had met the famed rock star on the set of “Kingsman: The Golden Circle” (2017). He recalls that off-screen the musician “was very funny and naughty and irreverent and cheeky as he always is.” And since portraying him, “we’ve become quite close, which is a lovely byproduct of the experience of playing him.” The experience continues to pay off with Best Actor nominations at the Golden Globes and SAG, which could soon translate into a career-first Oscar bid.

Rather than direct a standard biopic, Fletcher wanted to create a musical spectacle told from a first-person perspective. “Our storyteller, Elton, is an unreliable storyteller. Sometimes he’s lying, sometimes he’s trying to pull the wool over our eyes, sometimes he’s oversharing and being completely frank and honest,” he explains. “Because we’re inside of the storyteller’s mind, because we’re inside the emotional experience, it means that I’m free to explore his psyche as it were, to explore how he felt in that time.”

SEE Can Taron Egerton (‘Rocketman’) pull a Lady Gaga and win Grammy on his way to Oscars? He’ll have to beat Gaga first

Day’s flamboyant designs have already earned him nominations at the Critics Choice Awards and Costume Designers Guild. He previously competed at BAFTA, Critics Choice and the CDG for another musical biopic, “Bohemian Rhapsody” (2018). Rowland could also earn his first Academy Award bid for the film. Yianni-Georgiou previously contended at the Oscars and BAFTA for “Guardians of the Galaxy” (2014), and has reaped bids at Critics Choice and the Makeup and Hair Stylists Guild before making the Academy’s recent shortlist for “Rocketman.”