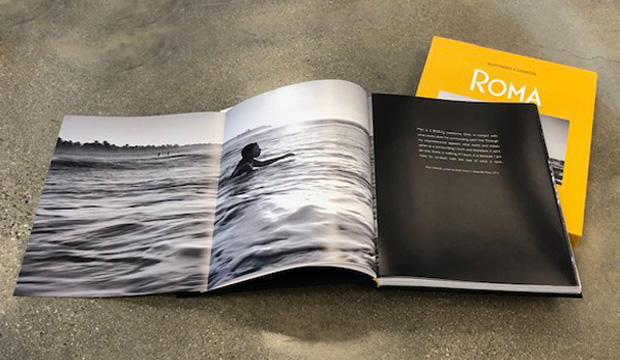 The coffee table book promoting Alfonso Cuaron’s “Roma” would have killed my dog if I’d dropped it on her when I brought it home from the post office.

I just put it on the scale and the thing weighs six pounds, two ounces. If you were to pay the cover price of $175 to order it from Assouline’s Publishing’s website, you’ll be paying around $28 a pound.

Here on the Oregon coast, that would buy you six pounds of fresh halibut or five pounds of Dungeness crabmeat. Those won’t last as long as the book but you’ll spend more time consuming them and you won’t have to worry about lugging them around later.

Don’t get me wrong; the eponymous book is a beauty, filled with gorgeous black and white photography from the movie with text to take you along on Cuaron’s poetic journey to his bourgeois childhood home in 1970s Mexico City. For us media recipients of the book, the reminders are all there for what we love about the film, in particular the look of it.

“Roma” figures to win every cinematography award handed out this season, including the Oscar. It’s that good and I don’t question that a big book was warranted.

But this is simply the heftiest item I have ever received in the form of a movie promotion, and Netflix, which I assume shouldered the costs of purchasing and sending them out in the, what, hundreds?, thousands?,  earns the Drunken Sailor Spending Award that used to be won every pre-Me Too year by Harvey Weinstein.

I’d send mine back on principle – humble journalists aren’t supposed to accept expensive gifts – but I’m not sure I could afford the postage.

That this making of book is already being sold on ebay makes me believe some colleagues may not be following that rule. However, there are bargains. As I write this, there are new Romas on ebay from an opening bid of $40 to a Buy It Now of $99.99, shipping not included.