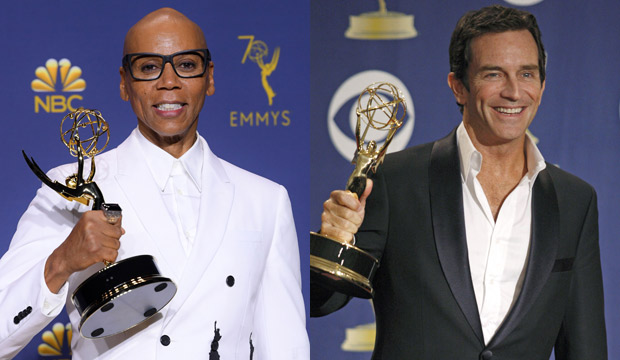 After winning back-to-back Best Reality Host Emmys for VH1’s “RuPaul’s Drag Race” in 2016 and 2017, RuPaul Charles sashayed away with trophy #3 at the 2018 Creative Arts ceremony. That puts him just one away from the all-time record holder Jeff Probst, who won four Emmys for hosting “Survivor” (2008-11). “This is my third Emmy Award — consecutive,” RuPaul proudly announced to the press. “She’s snatching trophies!” Will RuPaul to on to tie Probst’s record at the 2019 Emmys?

Last year’s Best Reality Host category consisted of RuPaul, W. Kamau Bell (“United Shades of America”), Ellen DeGeneres (“Ellen’s Game of Games”), Heidi Klum & Tim Gunn (“Project Runway”) and Jane Lynch (“Hollywood Game Night”). RuPaul became a three-time champ, while Lynch had previously won twice (2014-15) and Klum/Gunn prevailed once (2013). Besides Probst, the only other winner in the 11-year history of this category has been Tom Bergeron for “Dancing With the Stars” (2012).

SEE‘The Amazing Race’ is a DNQ at the Emmys for the 1st time, so which show do you want to grab its spot?

Prior to the reality TV boom of the 2000s, Probst took home his first-ever Emmy when “Survivor” won the catch-all category of Best Non-Fiction Program (Special Class). That brings Probst’s overall Emmy tally to five, which is just one more than RuPaul’s four trophies as he claimed victory as a producer of “Drag Race” last year when the empowering show won Best Reality-Competition Series.

“Tell everybody at the Gold Derby I said, ‘Heeey!'” RuPaul declared backstage in the 2018 Emmys press room when we asked him a question (watch below). “Y’all are doing a great job over at the Gold Derby. Where is the Gold Derby? It sounds like a great place to have lunch!”