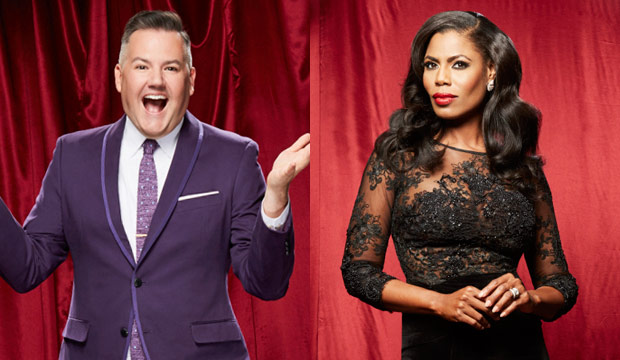 During the fourth episode of “RuPaul’s Drag Race” Season 11, the remaining 12 queens starred in “Trump: The Rusical,” a musical that mixed “Grease” with Donald Trump‘s White House. Each contestant took on the identity of women in Trump’s life, with Ra’Jah O’Hara playing former presidential aide/”Apprentice” villainous Omarosa. Since “Drag Race” judge Ross Mathews previously starred alongside Omarosa on “Celebrity Big Brother,” reality TV fans were treated to a mini reunion … sort of.

“I have a little experience with Omarosa,” Ross reminded host RuPaul Charles and fellow judges Michelle Visage, Tiffany Pollard and Joel McHale. “I shared a toilet for 29 days with Omarosa. She owns any room that she’s in. The problem with your Omarosa is that we didn’t notice you,” he told Ra’Jah.

Michelle also wasn’t feeling Ra’Jah’s impersonation in the “Grease” musical spoof. “When you think Omarosa, you don’t think pretty, you don’t think sweet,” she critiqued before adding, “I wanted to loathe you more. That’s the villain that she plays. I didn’t get that. I kinda lost you.”

SEEBrooke Lynn Hytes has best odds to win ‘RuPaul’s Drag Race’ Season 11, but watch out for A’Keria and Plastique

After all of the queens went backstage to untuck, RuPaul confessed, “Unfortunately in the challenge I did not see Omarosa.” Ross agreed with Ru, then readily admitted that he’s “scared” of Omarosa so he wasn’t going to “throw shade” her way. Instead, Ross stated, “Omarosa has an unforgettable presence. But I lost Ra’Jah tonight. You, ma’am, are no Omarosa. Nomarosa!”

In the end Ra’Jah was determined to be in the bottom three along with Vanessa “Miss Vanjie” Mateo (who played Rosie O’Donnell) and Mercedes Iman Diamond (who played Ivanka Trump). Miss Vanjie was deemed safe, which meant Ra’Jah and Mercedes had to lip sync for their lives. RuPaul liked Ra’Jah’s performance better, so Mercedes was eliminated from the competition.