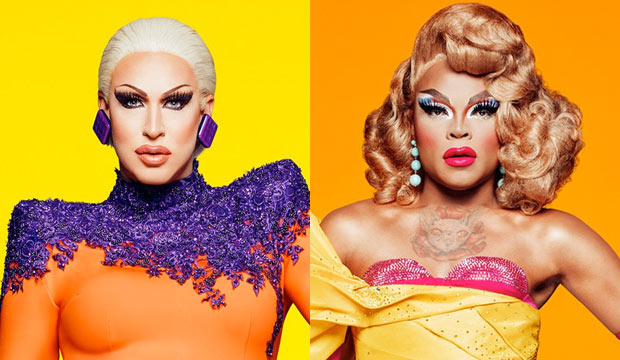 The cat is out of the bag. During Thursday’s episode of “RuPaul’s Drag Race,” Vanessa “Miss Vanjie” Mateo and Brooke Lynn Hytes finally addressed the showmance that’s taken Season 11 by storm. “Me and Vanjie have a crush on each other, and we’ll see where it goes,” Brooke Lynn said about the returning queen from last season before giving a high-pitched high school giggle.

While all of the remaining contestants were sitting around in their Orange Alert outfits from the previous week’s challenge, A’Keria C. Davenport blurted out what everyone else was thinking ever since the two started kissing each other. “You know, I’ve been noticing here lately a lot of chemistry between [Vanjie] and Brooke Lynn. What exactly is going on?” A’Keria asked.

Miss Vanjie and Brooke Lynn gave each other nervous looks before Vanjie stated, “Brooke Lynn is a good friend of mine. A really good friend.” Brooke Lynn then responded, “I think Vanjie’s really cute and we’re just getting to know each other.”

“It’s real fresh, out of the womb,” Miss Vanjie later said in a confessional about her showmance with this season’s front-runner. “You know, I’m going with the flow. Those kisses keep coming, I’m gonna keep accepting them, if you know what I’m saying.”

SEE‘RuPaul’s Drag Race’ reunites Ross Mathews with Omarosa … sort of: We ‘shared a toilet for 29 days’ on ‘Big Brother’

In the work room as all of the queens were preparing their looks for the “Monster Ball” challenge, Brooke Lynn came over to Miss Vanjie and gave her a supporting shoulder rub. Brooke Lynn later confessed, “Me and Vanjie, it’s nice having this thing happen. But this is work. We’re here for a competition. It’s not personal, it’s drag.” Miss Vanjie had the same mind set, revealing, “I want to make it crystal clear that ain’t no boy gonna come between me and the crown. I’m focused.”

Their showmance didn’t seem to have a negative effect on their performances in the challenge, as Miss Vanjie was deemed safe and Brooke Lynn was named the winner. This is Brooke Lynn’s second victory of the season after winning the season premiere challenge that required the queens to find inspiration in the clothing of past contestants. Is Brooke Lynn on her way to joining the “Drag Race” hall of fame?