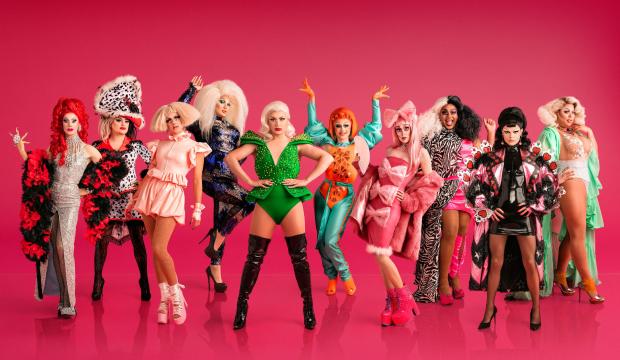 The inaugural season of “RuPaul’s Drag Race UK” premiered Thursday, October 3 as an official spin-off of the Emmy winning “RuPaul’s Drag Race.” Four time Emmy winning RuPaul Charles was on hand as host and head judge, ready to test the Brits in all things charisma, uniqueness, nerve and talent. In the premiere we were introduced to the 10 queens and watched as their heads were chopped off and they attempted to honor their Queen in a regal runway show.

Thursday’s episode was the first of eight hour-long episodes airing every Thursday on the BBC Three section of BBC iPlayer in the UK. The series is almost made available day-and-date in the US and other territories via WOW Presents Plus at 3 pm ET. Gold Derby will be following along all season with weekly recaps of the series to see which of the show’s 10 queens will be crowned the UK’s first drag superstar. If you miss the first run of the series at these times, be sure to tune in when it begins airing on Logo starting October 11th at 8 pm ET/PT.

The 10 queens competing this season are Baga Chipz, Blu Hydrangea, Crystal, Cheryl Hole, Divina de Campo, Gothy Kendoll, Sum Ting Wong, Scaredy Kat, The Vivienne, and Vinegar Strokes. Baga was the first to enter the workroom, promising to bring her “big massive knockers” and live vocals to the show. She was joined first by Blu, a self-described “school art project with legs” inspired by cosplay, and the “classy, sassy and a little bit brassy” Divina who references her drag as a both old school and new school styles.

Next to arrive was Crystal, inspired by glam rock and sci-fi/fantasy novels, Sum Ting who makes all her own clothes on a budget (but still glam), Cheryl who wants to prove that Essex queens aren’t always “falling out of clubs,” and the “dark and intimidating” Gothy. The final queens to enter were Vinegar, decked out in her signature animal print, Scaredy who describes her drag (which she’s only been doing for 11 months!!) as conceptual and gagged the girls when she admitted to being straight (gasp!) and having never performed before, and last but not least Vivienne, who a few years ago was crowned by RuPaul herself as the Drag Race ambassador to the UK.

Upon greeting the queens for the first time, Ru welcomed them to the workroom and declared that at the end of the season the queen crowned the winner would be brought to Hollywood to star in her very own web series. To kick off the competition, the queens posed for a mini challenge called “Off with Your Head” where each modeled with her severed head to produce a video postcard. Despite being the greenest (and youngest contestant ever) of the bunch, Scaredy Kat came out on tops, surprising some of the other queens that have been working in the industry far longer.

For the show’s first maxi challenge, Ru tasked the queens with interpreting their own queen’s style by translating one of Queen Elizabeth II’s iconic looks for the runway. But Ru wasn’t going to be satisfied with just one look so he also asked them to each show a second look, one that shows why they are the queen of their own hometown.

As the queens derobed in the workroom to begin planning their runway looks they also got to know each other a bit better as well as taking the time to discuss how drag in the UK is different from drag in the US. In their interpretation, UK drag is more open to different aesthetics and allows queens to be more creative with their visions. For instance, Crystal keeps his hairy chest and Blu has never worn fake tits. When the topic of plastic surgery and specifically teeth came up, Gothy got uncomfortable because of her insecurity about her own teeth especially since he sees himself as a beauty-focused queen.

During prep time, Scaredy and Vinegar swapped stories about their lives which gave Scaredy serious “mommy vibes” from Vinegar. Elsewhere Vivienne and Baga hit it off over a number of topics, like gorgeous Welsh men and the royals. Overall the girls were feeling the pressure of the first runway to hit the UK version of the series, but none more than Divina who with 15 years of drag under belt felt like she had something to prove to the younger queens.

Sitting on the judges’ panel this week was Michelle Visage, Alan Carr and special guest Andrew Garfield. The creative standouts on the runway were Crystal with a pearl strand wig and Divina with an user-cartoonish look in the Queen of Your Hometown runway and then Sum Ting as the Queen’s first class stamp, Blu as the Queen on the pound and Scaredy as “baby queen” in the Queen Elizabeth Realness runway. But based on the judges’ assessments Blu, Divina, Crystal and Scaredy were all declared safe and not included in the tops of the week.

Cheryl got high marks from Andrew with her first look, but she was docked on her Queen Elizabeth look specifically for not including a purse, which is a signature of the Queen. Sum Ting was a clear top scorer for both her looks–they liked that she went over the top with both and told her that it was the best way to make a great first impression. Andrew loved Baga’s interpretation of Amy Winehouse in her first look and Alan thought she nailed the demeanor of the Queen in her second look. Ru clocked Vivienne twice for wearing flats in both looks and stressed the importance of putting your best foot forward on Drag Race, but overall they loved that she was able to present two very different characters between the two. Vinegar was docked for the odd choice of putting the Thames River as a belt in her first look and then the second look left them wanting more as well. Michelle read Gothy down for her awkward presence on stage and Andrew offered some advice about how to overcome nerves.

Of the top 6 and based on their runway presentations, Ru first declared Baga and Sum Ting safe before announcing Vivienne as the winner of this week’s challenge! With Cheryl, Vinegar and Gothy left in the bottom only Cheryl was saved, leaving Vinegar and Gothy in the bottom to lip sync for their lives. For their last chance to save themselves from elimination, the bottom performed to “New Rules” by Dua Lipa. Both girls gave lackluster performances, and though Vinegar barely knew the words to the song she certainly brought more energy to the stage than Gothy. Then she may have sealed the deal with a wig + glitter reveal that had the panel screaming. Sure enough, it was Vinegar that received the “shantay” and Gothy Kendoll who was asked to “sashay away.”

'RuPaul's Drag Race' 12 episode 4 recap: The writing is on the 'Balls to the Wall' for one unlucky…

Which queen are YOU rooting for to win 'RuPaul's Drag Race' Season 12? [POLL]

'RuPaul's Drag Race' season 12 preview: Our first impressions of the 13 queens vying for the…

'RuPaul's Drag Race UK' episode 5 recap: The queens get loud with some spicy little mixes in a girl…