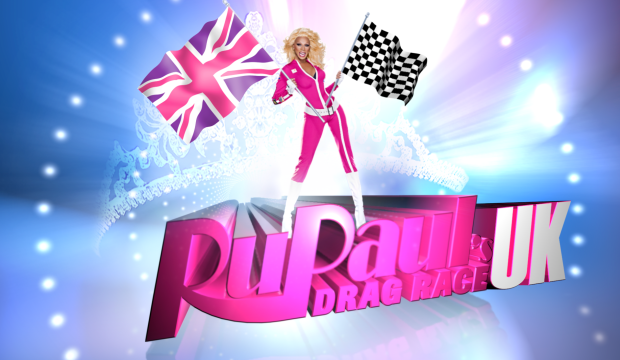 The inaugural season of “RuPaul’s Drag Race UK” is under way with 9 queens still vying for the kingdom’s newest crown. The queens still in the running are Baga Chipz, Blu Hydrangea, Crystal, Cheryl Hole, Divina de Campo, Sum Ting Wong, Scaredy Kat, The Vivienne, and Vinegar Strokes. In last week’s series premiere (“The Royal Queens”) RuPaul Charles selected The Vivienne as the challenge winner, preferring her two versatile looks to those of Sum Ting and Baga who were also on top. In the bottom, Vinegar was best in the lip sync for your life, sending a timid and stiff Gothy Kendoll home first.

“RuPaul’s Drag Race UK” airs every Thursday on the BBC Three section of BBC iPlayer in the UK. The series is also made available day-and-date in the US and other territories via WOW Presents Plus at 3 pm ET and on Logo starting October 11th at 8 pm ET/PT. After you check out the episode for yourself, be sure to read our own analysis of the show in our weekly recaps. Below is our take on episode 2!

With one challenge under their belt the queens found themselves shaping up their competition more and more. As the first winner, Vivienne was feeling pretty high especially in comparison to Cheryl who had just been in the bottom three. From Vivienne’s perspective there wouldn’t be much competition for her in Cheryl, but we peeped the beginning of a rivalry brewing in her annoyance of Cheryl’s chattiness. On the other hand it was amazing the rest of the cast wasn’t already tired of Vivienne’s confidence because she really drove it home the next morning that she had indeed won the first challenge!

But Ru may have complicated that issue later when he revealed this week’s micro mini challenge. As the challenge winner Vivienne was asked to line up the other eight girls from “top” to “bottom” based on who she believes to be her biggest competition. Surprisingly she ranked last week’s worst performer, Vinegar, at the top followed by Baga, Crystal, Divina, Sum Ting, Blu, Cheryl and Scaredy. The line up was a way for Ru to size up how the queens are perceived, but also to trick Vivienne into selecting the girl that would compete against her in a team challenge.

So, for the main challenge Ru had Vivienne and Scaredy serve as a team captains for performances in the costume drama “Downton Draggy” to test their acting, stage presence, star quality and the LOLs. The teams were handpicked, starting with Scaredy who chose Divina, Cheryl, Blu and Crystal. Vivienne chose Vinegar, Baga and Sum Ting. Both teams had an easy go at assigning roles based on their scripts, but it was immediately clear that the girls on Scaredy’s team were intimidated by the other team which was all the girls that Vivienne had selected as the strongest overall. That being said, they knew that being the underdogs gave them the opportunity to prove them wrong and make a huge impression on the judges because of it.

On set, series judge Michelle Visage was on hand to direct the queens through their scenes and up first was Vivienne’s team. Here Sum Ting struggled the most, trying desperately to find an American accent to match her Mariah Carey-like character and to remember her lines. And while Vivienne and Vinegar were serviceable, Baga completely stole the show with her over-the-top and slightly grotesque take on a maid that had everyone on set, including Michelle, rolling with laughter. On the other team, Divina was the veteran and easily stood above the rest. That didn’t prove too hard of a task though because Scaredy, Blu, Cheryl and Crystal were all having a rough go at it.

Later, while the girls applied makeup for the main stage, Scaredy, Vinegar and Sum Ting discussed their experiences with coming out, both about sexuality and as drag queens. Scaredy, the youngest in the competition, is openly pansexual which is a far cry from Vinegar (from the Caribbean) and Sum Ting (first generation Chinese) who both had/have tougher experiences because of their cultural heritage. Sum Ting’s parents for instance don’t know that he’s a drag queen, that he’s even gay or that he lives with his partner of five years. In that sense the show is a chance for him to prove to them that they can be proud of him regardless of all that.

On the main stage, Ru and Michelle were joined by series judge Graham Norton and Emmy nominee from “Game of Thrones” Maisie Williams who would help decide the placements in this week’s acting challenge as well as score the runway looks in the category “Bond Girl Glam-o-rama” where the girls created their own Bond girl alias. Vivienne opened the show as Serena Shart in a shimmering magenta hooded catsuit inspired by Grace Jones. Sum Ting arrived as May Ting also in a hooded catsuit, but having opted to go wigless. Vinegar was Mrs. F. Tits with a bitchy, all business no play look and a sleek black wig. Baga went the comedy route again as Lazer Minnelli with a sequined tuxedo, bowler hat and carrying a cocktail glass in her jazz hands. Cheryl tiptoed out as 00Dipshit in an elegant black dress that she ripped off to reveal sexier hot pants and garter underneath. Crystal as Wanda Whipper was similarly secretive, though her reveal was a latex bondage catsuit with whip underneath an orange trench. Scaredy’s Kitty Rouge was reminiscent of Amelia Earhart with the flying goggles and brown bomber jacket. Divina’s alias Paris Eatemall was a much more intriguing assassin figure featuring an eye patch, knives and a statement red wig. Blu rounded out the show as Triple Tatas who revealed, you guessed it, three breasts under black leather spy (dominatrix?) gear.

Based on their performances in “Downton Draggy” and on their runway presentations, the judges determined that Team Vivienne were the winners, making them all safe from elimination. Of the four, Ru rightly selected Baga as the overall winner for her excellent runway interpretation and her hilarious turn in the acting challenge. The left the five members of Team Scaredy Kat vulnerable to critiques. Graham loved Cheryl’s look for the runway, but was disappointed in her choice for the scene thinking she was better suited in a different role. Maisie called Crystal’s runway look “terrifying, but in a good way” and the judges thought her acting was hit and miss. Scaredy was deemed “one note” as her character and Michelle wanted to know if she planned to always do her makeup as a cat. Divina was singled out in the group as the strongest and Graham and Maisie both highlighted how different her two looks were between the show and runway. Blu had a bold and strong look for the runway, but in the acting challenge she fell into the background for not showing off who the character was supposed to be.

Backstage the girls chatted a bit about the direction they thought the judges’ deliberation would go, but the conversation quickly turned to Cheryl’s perceived inability to be herself in the competition. It became an emotional moment for Cheryl who admitted to the fault, which further bothered Vivienne since it was clear that Cheryl was stealing some of the spotlight away from the girls who would likely fall in the bottom for a lip sync.

When push came to shove, the judges decided that of the five girls Divina, Crystal and Cheryl were good enough to stay. That meant that Scaredy and Blu fell to the bottom to lip sync for their lives. The two younger queens performed to Bananarama‘s “Venus,” marking Scaredy’s first ever stage performance in her budding career. In the head-to-head both were comedic and brought a ton of energy, but Blu had more tricks to show off and worked the stage with more moves than Scaredy who relied on her quirkiness. Both gave a great effort that had Ru smiling, but the choice was clear… a “shantay” for Blu while Scaredy was asked to “sashay away.”

'RuPaul's Drag Race All Stars' episode 10 recap: Queens roast one another in 'The Kennedy Davenport…

'RuPaul's Drag Race All Stars' episode 7 recap: Another design challenge heats up the competition in…

'RuPaul's Drag Race All Stars' episode 6 recap: Queens compete to top the charts with their 'Total…