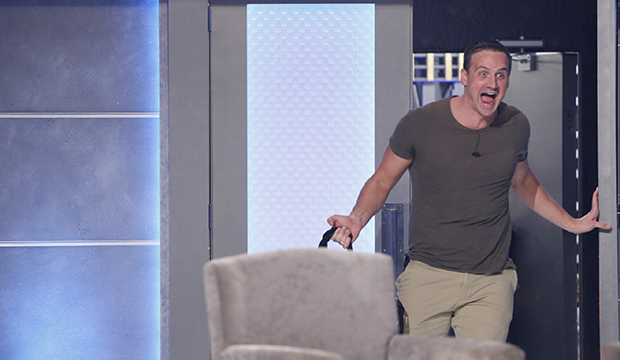 Unlike with his boy Jonathan Bennett‘s eviction, Ryan Lochte was hardly shocked when he got backdoored on Monday’s “Celebrity Big Brother.” The writing was on the wall after Jonathan got the boot and HOH Kato Kaelin and Tom Green teamed up with Natalie Eva Marie and Lolo Jones to go after Ryan. Having his fellow Olympian and one-time ally Lolo flip him off and target him was surprising, Ryan admitted to Entertainment Weekly, but he has a feeling he knows why she did.

“I guess she got a little butthurt that I was close with Jonathan and not her and she just came after me,” the swimmer told EW.

SEE ‘Celebrity Big Brother 2’ spoilers: Who are round 3 eviction nominations for Feb. 2 live episode of #CBB2

Indeed, Lolo admitted as much on the live feeds and in the Diary Room. The hurdler and bobsledder, one of 10 Americans to have competed in the Summer and Winter Olympics, has been schizophrenic when it comes to Ryan the entire time. She was first peeved to see there was another Olympian in the house and then revealed her Olympic inferiority complex when she claimed that Ryan’s been to three Olympics and medaled once; he quickly corrected her that he’s been to four and has 12 medals, to which she said, “Who’s counting?” and asked him to give her one. (Lolo was the favorite to win the 100-meter hurdles in Beijing, but clipped the penultimate hurdle; she finished fourth in London and didn’t compete in Rio due to injury, and placed 11th in the two-women bobsled in Sochi and wasn’t named to the Pyeongchang team.)

SEE ‘Celebrity Big Brother 2’ spoilers: Who won the Power of the Publicist

They had a short-lived alliance that ended when Jonathan convinced Ryan not to nominate Dina Lohan, but didn’t give Lolo and Natalie a heads up. And then the brewing Jochte bromance made Lolo jealous, leading to the double bird flip. Even though she was the one who was annoyed by his presence in the first place, Lolo seemed to think their Olympic bond automatically made them BFFs and he wasn’t allowed to befriend anyone else, which shocked Ryan as well.

“[The bird flip] kinda hurt. I wasn’t really close friends with her. It was more like I knew her just from being the Olympics in 2012,” he said. “We have a respect for each other, being Olympians. But when she did that to me — that little gesture of flipping us off — I was in shock. I was like, ‘What the heck is going on? That’s not right.'”

Ryan, of course, briefly entertained the idea of backdooring Lolo, who sobbed after his eviction, but ultimately didn’t. As he told Julie Chen Moonves, though, there are no hard feelings, and he wasn’t having it when she tried to imply there’d be tension between him and Lolo should they both make Tokyo next year; he knows this is just a game. Leave it to Ryan Steven Lochte to be the voice of reason.

SEE Ryan Lochte (‘Celebrity Big Brother’) exit interview: ‘Swimming for me is easy. That was INSANE!’

He is not, however, picking Lolo to win “Celebrity Big Brother” yet at least. “I think it would have to be Natalie or Kato,” he said. “Natalie is just a very good manipulator. She just does her sweet talk and that’s how she’s been getting people. She’s a little sneaky. A little too sneaky. And Kato is a poker player and an athlete, so a jack of all trades. So he can read people. He can read all the B.S. and everything, so I think he’s one to watch out for.”

'Celebrity Big Brother 3' episode 11 recap: Was Carson or Lamar (or someone else) evicted? [UPDATING…

'Celebrity Big Brother 3' episode 9 recap: Was Miesha or Todd (or someone else) evicted? [UPDATING LIVE…