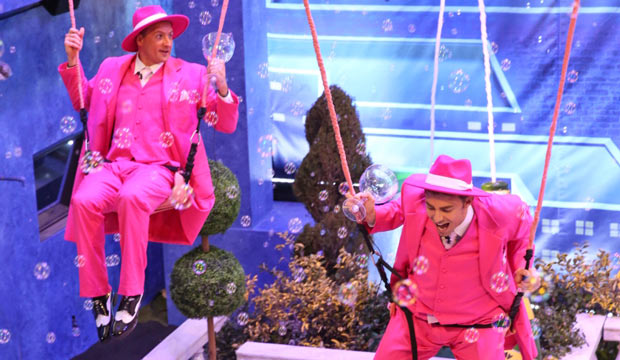 At the end of the “Celebrity Big Brother” Season 2 premiere, Julie Chen Moonves revealed the first big twist of the year: One of the winners of the “Drinks on Us” competition — Olympic medalist in swimming Ryan Lochte or actor/TV host Jonathan Bennett — will become the first Head of Household, while the other will become a nominee for eviction. Needless to say, Ryan and Jonathan were not happy. “Wow,” stated Ryan. “What?!” shouted Jonathan. Are you as shocked as Team Pink? Or, after so many years watching “Big Brother,” have you learned to expect the unexpected?

Ryan still seemed to be in a state of shock later on in the Diary Room when he asked, “Julie, why’d you have to do that? Why?” He continued on, “I’m made for competition. That has been my entire career. So Jonathan, I’m sorry, but this is gonna be a tough one for you, buddy.”

“This is crazy!” Jonathan later declared privately. “I could be on the block. I don’t know how I’m gonna beat the 12-time Olympic medal champion, Ryan Lochte, but I have several participation trophies. So watch out Lochte, Mr. Congeniality is coming for you!”

“Things just got real for the celebrities as the game has kicked into full gear,” teased longtime host Julie. Either Ryan or Jonathan will be named the Head of Household on Tuesday’s episode of “Celebrity Big Brother” after they battle against each other. The loser will then become the first nominee, but he’ll soon be joined by a second nominee of the HOH’s choosing. (All cast members are eligible except for Kato Kaelin and Natalie Eva Marie, who are immune this first week.)

But just because you’re nominated for eviction doesn’t mean you’re necessarily going home. On Wednesday’s episode the first Power of Veto is up for grabs. The winner of the coveted Veto can use it to save one of the nominees from the eviction block. If that happens, the HOH will have to nominate a new houseguest in their place. Find out who’ll be the first person evicted live from the “BB” house on Friday’s episode.