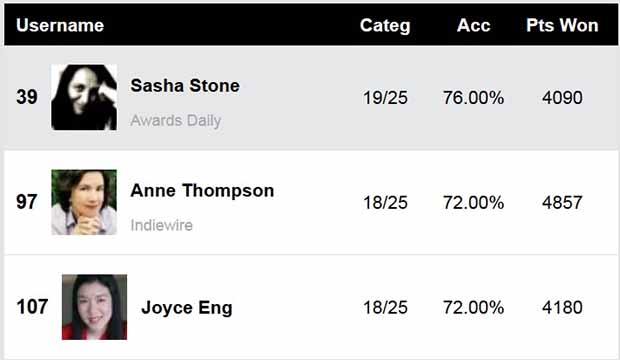 Congratulations to our Expert Sasha Stone (Awards Daily) for an excellent score of 76% when predicting the 2020 SAG Awards film nominations on Wednesday. She is best among 21 Experts, journalists who cover the entertainment industry throughout the year. See Experts’ scores.

Over 2,500 people worldwide predicted these Screen Actors Guild nominees in five categories for the announcement held in Los Angeles. Winners will be announced January 26 at a TBS/TNT ceremony. Our top scorer got 19 out of 25 nominees correct with some nice long shot picks, including Lupita Nyong’o for “Us” (film actress), Cynthia Erivo for “Harriet” (film actress) and Christian Bale for “Ford v Ferrari” (film actor).