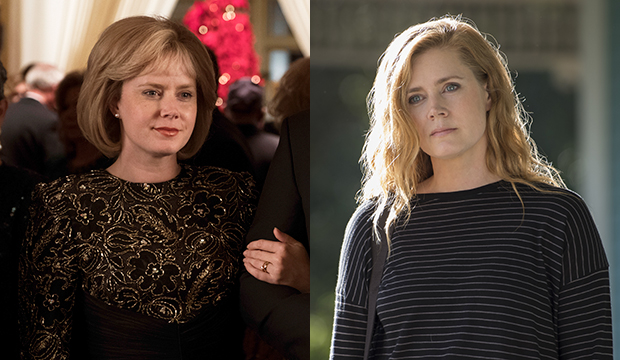 Amy Adams went 0-2 at the Golden Globes and 1-2 at the Critics’ Choice Awards, but she might finally bat 1000 at the Screen Actors Guild Awards: She’s is the overwhelming favorite to become the third person to win two individual SAG Awards in one night.

Adams leads our supporting actress and limited series/TV movie actress predictions with 82/25 odds in both races for her performances in “Vice” and “Sharp Objects.” She had the same nominations at the Globes and Critics’ Choice, but lost the film award to Regina King (“If Beale Street Could Talk”) at both ceremonies and the Globe to Patricia Arquette (“Escape at Dannemora”). Adams and Arquette tied at Critics’ Choice, where they gave a delightful joint speech.

Arquette is in second place in our SAG odds, so she could edge out Adams again. But King was left out in the cold from the Best Supporting Actress lineup, which opens the door for Adams to grab her first individual SAG Award and gain some Oscar momentum on King.

Helen Mirren and Idris Elba are the only people who’ve taken home two individual SAG Awards in one night. Mirren won lead actress for “The Queen” (2006) and was honored for playing another monarch in the miniseries “Elizabeth I.” Elba prevailed for his supporting turn in “Beasts of No Nation” (2015) and for limited series/TV movie actor for “Luther.” He remains the only SAG winner who did not receive an Oscar nomination.

Adams, who has a SAG ensemble trophy for “American Hustle” (2013), isn’t the only person who could go 2-for-2. Emily Blunt (“Mary Poppins Returns,” “A Quiet Place”) and Emma Stone (“The Favourite,” “Maniac”) also have double individual bids, but neither is expected to win. They’re both in the supporting film race alongside Adams, with Stone in third, behind her co-star Rachel Weisz, and Blunt in fourth, followed by Margot Robbie (“Mary Queen of Scots”). Stone is in fifth place in the limited series/TV actress race, trailing Patricia Clarkson (“Sharp Objects”) and Penelope Cruz (“The Assassination of Gianni Versace: American Crime Story”), who are in third and fourth, respectively. Blunt is also in fourth place in the lead actress film race.