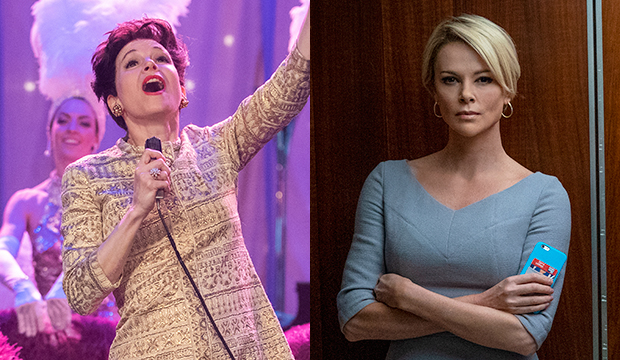 Last January, Frances McDormand accomplished something no one had ever done before: win more than one lead actress SAG Award. She took home the statuette for “Three Billboards Outside Ebbing, Missouri” (2017), 21 years after her first victory for “Fargo.” And she could get some company this season.

A three-time SAG Awards champ, Zellweger won this category for “Chicago” (2002), but wound up losing the Oscar to Nicole Kidman (“The Hours”) — one of seven times the SAG Awards winner didn’t go on to win the Best Actress Oscar. The following year (when Zellweger won in supporting for “Cold Mountain”), Theron dominated the season for “Monster” (2003), claiming everything except BAFTA, where she wasn’t eligible.

Both two-time nominees in the category, they are back in the running this year for their transformative turns as two real-life but very different individuals: Judy Garland and Megyn Kelly. Zellweger, who’s been the Oscar favorite since “Judy’s” release last month, captures the icon’s raw pain onstage and off in the final year of her life, while Theron is so uncanny as Kelly, you forget you’re not watching the former Fox News anchor. Theron rocketed into the top five shortly after “Bombshell” screened for the first time last week to high praise and astonishment at her transformation.

The other three predicted nominees are all looking for their first win, not just in the category but at the SAG Awards in general. Scarlett Johansson (“Marriage Story”), who’s in second place, has never been nominated before. Awkwafina (“The Farewell”), who’s in third, was nominated as part of “Crazy Rich Asians'” ensemble, while four-time nominee Saoirse Ronan (“Little Women”) is seeking her third lead actress bid.