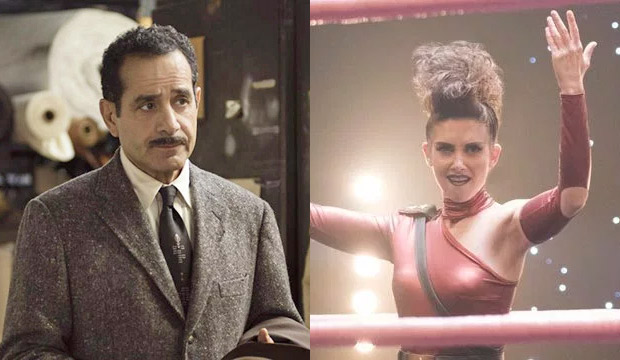 Screen Actors Guild Awards voters will face an interesting situation in the TV comedy categories this year. Both the male and female races have two sets of nominees from the same show, and one outlier. For the males, Bill Hader and Henry Winkler are both nominated for “Barry” while Alan Arkin and Michael Douglas are in for “The Kominsky Method.” Tony Shalhoub for “The Marvelous Mrs. Maisel” is the sole representative for his show, at least on the male side. For the females, Rachel Brosnahan and Alex Borstein are nominated for “Maisel,” and Jane Fonda and Lily Tomlin earned their third consecutive nominations for “Grace and Frankie.” The lone wolf here is Alison Brie for “GLOW.” There is a scenario where votes could split between all these double nominated shows, allowing Shalhoub and Brie to sneak right through the middle and win.

SEE‘Ozark’ cast could be the one to beat at 2019 SAG Awards thanks to Jason Bateman, Laura Linney, Julia Garner

Looking at the first 24 years of SAG history, there have been 10 years in which at least one pairing from a show has been nominated together for Outstanding Performance by a Male Actor in a Comedy Series, and eight years for Outstanding Performance by a Female Actor in a Comedy Series. Of those years, there has been only one instance for the men and one for the women where a performer has beaten a co-star: Robert Downey Jr. over Peter MacNicol for “Ally McBeal” in 2000 and Megan Mullally over Debra Messing for “Will & Grace” in 2003.

In every other situation, double nominees have lost to an actor who is the lone representative for their show. There are even a few cases in which the current hypothetical of a sole rep beating two pairs of co-stars has come to pass, including John Lithgow (“3rd Rock from the Sun”) beating two “Frasier” and “Seinfeld” actors in 1996 and 1997, and Sean Hayes (“Will & Grace”) beating two “Everybody Loves Raymond” and “Frasier” stars in 2001.

So how likely is it that Shalhoub and Brie could pull off such victories? Shalhoub is fourth in Gold Derby’s odds while Brie comes in third. However, if we break down each category, there is still a very realistic path for both actors to pull off an upset. Hader and Winkler both won Emmys for their performances, and while Hader is the clear lead between the two of them, Winkler is decidedly more broadly comedic, which they like in this category. Douglas and Arkin are in a similar situation, with the added factor that “The Kominsky Method” is so new that it’s unknown whether the 160,000+ SAG-AFTRA voters will have watched it. Shalhoub may not be the lead of “The Marvelous Mrs. Maisel” but he had an uptick in screen time in Season 2 and has already won two SAG Awards for “Monk” in this very category. “Maisel” is also clearly beloved by the voting body, with a leading four nominations.

As for the actress race, Fonda and Tomlin are co-leads in “Grace and Frankie” with no clear choice over the other. Most SAG predictors agree that Brosnahan is far out in front to win for playing the titular role in “Mrs. Maisel,” even over Borstein, but the latter had very strong material in Season 2, and has a similar broad sensibility as past SAG winners in supporting roles, like Uzo Aduba and Betty White. Voters who aren’t fans of either “Grace and Frankie” or “The Marvelous Mrs. Maisel” have a strong option in Brie, nominated for the second year in a row for “GLOW.” Brie is a past SAG winner herself as part of the ensemble of “Mad Men,” and “GLOW” just earned its second consecutive ensemble nomination, so there is clear support for the actress and her show.