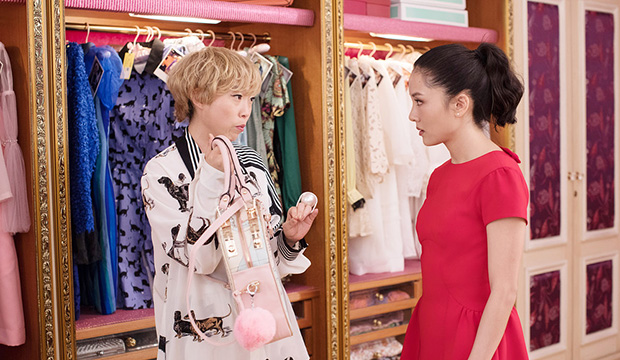 With a U.S. box office haul of $174.5 million and $238.5 million worldwide, “Crazy Rich Asians” is the highest-grossing romantic comedy of the last 10 years and the sixth highest-grossing ever. Will it be able to ride its wave of support all the way to an ensemble win at the Screen Actors Guild Awards?

Based on Kevin Kwan’s 2013 novel of the same name, the movie follows Nick Young (Henry Golding) and his girlfriend Rachel Chu (Constance Wu), who go to his native Singapore to attend his friend’s wedding. Little does she know he comes from a loaded family, who does not exactly welcome her with open arms; his mother Eleanor (Michelle Yeoh) tries to put an end to their relationship.

The movie does an amazing job balancing comedic and dramatic aspects, which is only enhanced by the wide range of performances by the cast, which also features Awkwafina, Gemma Chan, Lisa Lu and Ken Jeong. They all play off each other incredibly well and all have their moments to shine, making them a true ensemble.

Critic Kimberley Jones (Austin Chronicle) states that while Golding “doesn’t have a lot to work with,” he “ably performs his required duties, which are to be devoted, honorable, and swoon-worthy,“ and even goes to say that Wu “betters the book version of Rachel by making her earthier, steelier, and more playful.” Jenna Bush (IGN) praises the supporting performances by Awkwafina and Chan, stating that the former’s energy carries viewers “through the scenes with her family that might have been tedious in another film,” while the latter “rings a gravitas and a subtle power to a quiet and kind woman who is doing everything she knows how to uplift her much less wealthy husband.” And Caroline Siede (The A.V. Club) calls Yeoh “the film’s true standout,” who “makes the perfect sparring partner for Wu.”

As the “Crazy Rich Asians” cast is the first all-Asian cast to lead a Hollywood film in 25 years, an ensemble win would be a powerful statement from the industry, especially since actors of Asian descent have been under-appreciated or even overlooked entirely. But aside from its cultural impact, the cast may benefit from being in a feel-good, crowd-pleasing movie that many people are in need of right now, given the current political climate in the country; it’s a movie that will resonate with a wide range of people.

The SAG Awards voting body features film and TV stars, which could bolster the cast’s chances, as Yeoh (“Star Trek: Discovery”), Wu (“Fresh Off the Boat”), Chan (“Humans”), and Jeong (“Community,” “Dr. Ken”) are or have been television regulars. And Yeoh, in particular, is an industry legend. Plus, the cast already picked up a notable ensemble nomination at the Critics’ Choice Awards, and while it lost to the cast of “The Favourite,” the movie did walk away with the Best Comedy Film prize. It also reaped bids for Best Comedy/Musical Film and Best Comedy Actress for Wu at the Golden Globe Awards.

That being said, it faces stiff competition from the ensemble casts of “BlacKkKlansman,” “Black Panther,” “Bohemian Rhapsody” and “A Star Is Born.” “Crazy Rich Asians” and “Black Panther” are the only films that didn’t receive an individual acting bid, which could end up hurting its chances. In our combined odds, it’s currently in fourth place with odds of 9/2.

What do you think? Do you think the “Crazy Rich Asians” cast deserves to win the ensemble prize at SAG? Make sure to let us know in the comment section below.