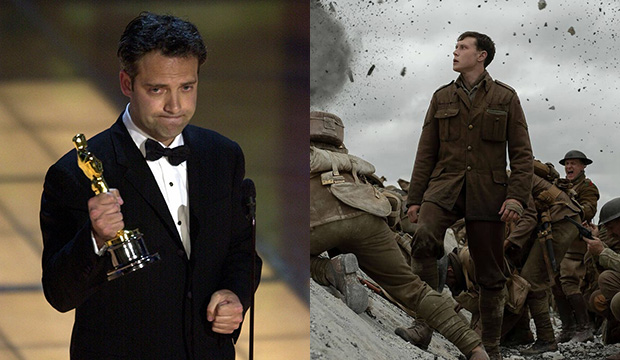 Sam Mendes really knows how to end a decade on a high note. Twenty years ago, he made his feature film directorial debut with “American Beauty” (1999), which went on to win the Best Picture Oscar, along with Best Director for Mendes — the most recent director to prevail for a debut. Now, he’s back with his World War I epic “1917” and is a massive contender to take home a bookend Best Director statuette, which would give him the longest gap between two wins.

Twenty-one people have scored multiple Best Director Oscars — 18 with two, two with three and one with four — but most have typically won two of them within a period of 10 years. Five have a gap of more than 10 years between two victories. The record is currently held by Billy Wilder, who won his two awards 15 years apart for “The Lost Weekend” (1945) and “The Apartment” (1960).

Clint Eastwood‘s twin wins for “Unforgiven” (1992) and “Million Dollar Baby” (2004) are 12 years apart. The indefatigable 89-year-old is also back in this year’s race with “Richard Jewell,” and a victory would put him at a 15-year spread from “Million Dollar Baby.”

SEE ‘1917’: Sam Mendes, Roger Deakins and more on how it takes ‘a lot of praying’ to make a one-shot war movie [WATCH]

Mendes hasn’t been nominated since his big breakthrough, so if he does nab his sophomore bid and wins, he’d have a 2-for-2 record like Frank Borzage, who triumphed for “7th Heaven” (1927/28) (in the drama directing category) and “Bad Girl” (1931/32), and reigning champ Alfonso Cuaron, whose victory for “Roma” came five years after his first for “Gravity” (2013).

Since “1917” held its first screenings last weekend, Mendes has risen from fifth to fourth place in our director odds, with multiple Experts and Editors picking him for the win. Shot to look like one continuous take — DP Roger Deakins is staring down at a second cinematography Oscar — “1917” is a visual spectacle with a character-driven story at the center, following two young soldiers tasked with delivering a message to stop a planned British attack that will lead 1,600 soldiers into a trap. The film is inspired by stories Mendes’ grandfather, Alfred Mendes, told him of when he was a messenger on the Western Front. The director also co-wrote the screenplay with Krysty Wilson-Cairns and served as a producer, so he could wind up with a hat trick of Oscars for it.

Here are the director win gaps from longest to shortest: