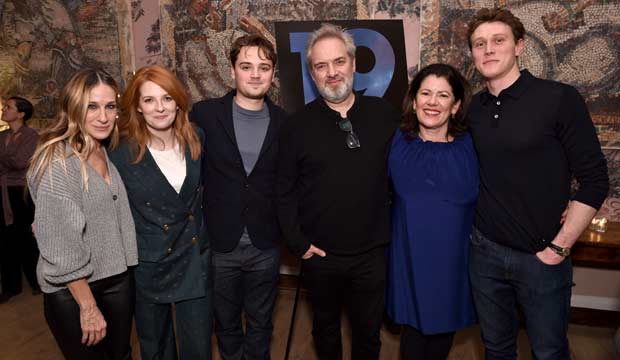 Sam Mendes knows the stories of World War I are a tough sell. The source material has all died off. Maybe that’s one reason this academy screening of “1917” was hosted by Sarah Jessica Parker — see, Carrie Bradshaw thinks WWI is cool! Actually, the pair “go way back, old friends,” Mendes said.

But his single shot film was actually inspired by his grandfather and the stories he told … eventually.

“My grandfather fought in the First World War between 1916 and 1918. He enlisted as a 17-year old boy. And he never spoke about it to his children. But for some reason in his 70s he decided he would open up. It was his grandchildren he decided to tell his stories to and I was one of them,” the director told a packed midtown screening room. “I noticed when I was 11 or 12 that he used to wash his hands all the time over and over and we would laugh at him — me and my cousins. And I asked my father, ‘Why does granddad wash his hands all the time?’ And he said it’s because he remembers the mud of the trenches and the fact that it could never be cleaned.”

Perseverance won out. But the results were not what they predicted when they first asked him to share his experiences: “We pestered him, and the stories we expected were of heroism and bravery and how he won his two medals, and instead he told us stories of chaos and the luck that he remained living at the end of the war. The solitariness of his experience spoke to me.”

When asked why there are only a handful of World War I movies, he was pragmatic. “The images are limited to trenches. It’s 100 years and the people who fought in that war have all died, and there’s a danger that all of this will be forgotten. And it was a long time before people like my grandfather wanted to talk about it.”

He added that our shared references for WWII are from the movies we see. But there are few documented images of the First World War, though he failed to mention Peter Jackson‘s recent archival documentary “They Shall Not Grow Old.” Instead, Mendes noted that for most WWI inspiration “you have to go back to literature.”

He called the single-shot concept of the film “an exercise in commitment.” He wanted to put his characters in the trenches, and he wanted the audience “tied together with the men.” So “1917” doesn’t conform to regular war movies. And long takes lead to a lot of “happy accidents.” He credits a totally committed crew that was “all in” and “involved in every moment of every shot.”

He also said original stories like “Ford v Ferrari,” “Once Upon a Time in Hollywood” and his own film are “much harder to make than it used to be.” But the current system of streaming and theatrical hybrids makes this “an incredible time of creativity and prolific storytelling on an epic scale.”

Mendes believes some of his earlier films like “Revolutionary Road” would probably have been streaming instead of theatrical releases if they were made today. The challenge now is to make something that demands to be seen on a big screen.

SEE‘1917’: Sam Mendes, Roger Deakins and company on how it takes ‘a lot of praying’ to make a one-shot war movie [WATCH]

“When you do make a movie for the cinema you have to be ambitious and make it something that has to be seen in a cinema. What’s going to make people come and see it? … Find movies and stories that can fill that space. Not every movie can play on the biggest screen. If it’s smaller and intimate it’s fine to have it on television,” he feels.

And of his own viewing habits? “I can’t sit for 10 hours,” he admits about the binge-watching. “My head explodes. I want something in two hours with a beginning, middle and an end that I can go out and have supper afterwards.”

And so, appropriately enough, after the screening hors d’oeuvres were passed around.