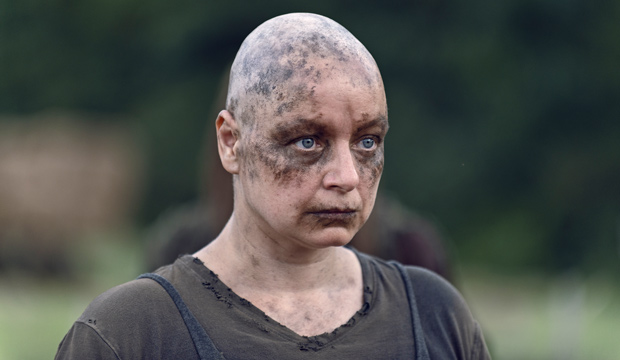 No actor on “The Walking Dead” has ever been nominated at the Emmy Awards — not Andrew Lincoln (Rick), not Melissa McBride (Carol), not Jeffrey Dean Morgan (Negan), etc. But all of that could change this year if Emmy voters decide to recognize Samantha Morton as Best Drama Supporting Actress. This acclaimed English actress is a two-time Oscar nominee, so she brings a level of prestige and experience to Alpha, the murderous leader of the Whisperers. Below, see my four reasons why Morton could make history for AMC’s nine-year-old zombie apocalypse drama.

SEE‘The Walking Dead’ actors on Emmy ballot: Andrew Lincoln and Lauren Cohan are submitted in guest, 5 others in supporting

1. Emmy loves Oscar
It’s true: Emmy’s deep dark secret is that she yearns to one day be as influential and significant as her big brother Oscar. That’s why we often see Academy Awards faves dominating the Emmy Awards the moment they make an impact on television, from Nicole Kidman (“Big Little Lies”) to Martin Scorsese (“Boardwalk Empire”) to Frances McDormand (“Olive Kitteridge”). This year Morton fits that bill, having been nominated for two Oscars: Best Supporting Actress for “Sweet and Lowdown” (1999) and Best Actress for “In America” (2002).

2. Emmy loves villains
The number of villains that have walked away with Emmys is overwhelming, proving that voters can’t get enough of bad guys (and girls) who twirl their figurative mustaches and wreak havoc for our heroes. In the Best Drama Supporting Actress category alone, recent antagonistic champions have included Ann Dowd (“The Handmaid’s Tale”), Maggie Smith (“Downton Abbey”) and Margo Martindale (“Justified”). Unlike those three, Morton takes her villainy to the next level, with Alpha having murdered several fan-favorite characters throughout her run on the show.

SEEMelissa McBride breaks her silence on shocking ‘The Walking Dead’ death: ‘How much more’ can Carol take?

3. Emmy loves makeovers
Morton is virtually unrecognizable in her role as Alpha thanks to all that dried blood, smeared dirt and — oh yeah — completely shaved head. There’s nothing like a physical makeover to pique voters’ interests, and Morton gives one of the most dramatic transformations of the TV season. The British native also adapts a southern American accent with a sort of low-pitched growling tone … that is, when she’s speaking at all. For the most part Alpha remains silently gazing ahead with those cold, icy eyes.

4. Emmy loves comebacks
To date “The Walking Dead” has amassed 16 below-the-line Emmy bids, with two wins for Best Prosthetic Makeup (2011 and 2012). Even though ratings were down for this one-time juggernaut, Season 9 most definitely experienced a creative comeback under new showrunner Angela Kang. “The Walking Dead” hasn’t been this good in years, thanks in part to Alpha’s introduction and the big-time cast departures of Lincoln and Lauren Cohan. In other words, an individual acting nomination for Morton would really be a way to recognize the entire production.