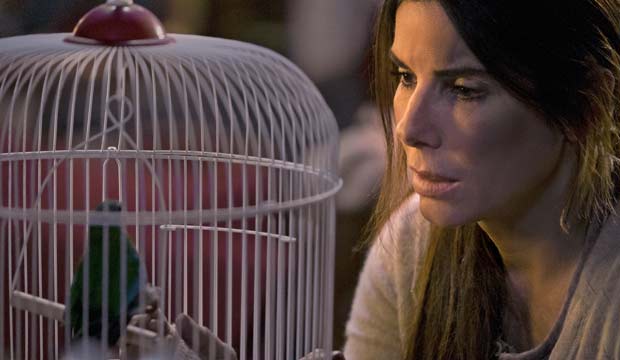 “Bird Box” was a surprise word-of-mouth hit when it premiered on Netflix last winter. The horror film stars Sandra Bullock as a woman struggling to survive in a post-apocalyptic world where she’s forced to keep herself and her children blindfolded or else succumb to a supernatural force that causes suicidal madness. So she’s literally scared senseless in the film. Do you think she’ll win the MTV Movie and TV Award for Most Frightened Performance?

Bullock has a long history at these kudos, going all the way back to her breakthrough role in “Speed” 25 years ago. That film won her three MTV Movie Awards (long before they started including TV shows): Best Female Performance, Most Desirable Female and Best On-Screen Duo with Keanu Reeves. Since then MTV has also nominated her for performances in “While You Were Sleeping,” “The Net,” “The Proposal,” “The Blind Side” and “Gravity.” She also received the honorary Generation Award in 2010 for her career achievements. But she hasn’t won a competitive category since her triple “Speed” victories.

We think that will change this year. Hundreds of Gold Derby readers have already made their predictions here in our predictions center, and according to their combined forecasts, Bullock is the Frightened front-runner with leading odds of 82/25. That includes support from 19 of our Top 24 Users who got the highest scores predicting last year’s MTV Movie and TV Awards.

Bullock’s closest threat is Alex Wolff, who was terrorized by supernatural forces in “Hereditary.” He ranks second in our predictions with odds of 19/5 and the backing of 3 of our Top 24, so we mustn’t count him out. Rounding out the category are Victoria Pedretti (“The Haunting of Hill House”), Linda Cardellini (“The Curse of La Llorona”) and Rhian Rees (“Halloween”). Do any of them have a chance of beating Bullock, or will she see her way to victory?